If you’ve never come for a visit (and – heavens! – why haven’t you?), you know that our house it a little charming and a lot quirky.  Being none too spacious, it was a little bit of a brain teaser to try and determine whether or not we could create some sort of play area for Bennett.  And while I do argue that this is for Bennett, I can’t deny that it’s partly for me, too.  Creating a designated area means that I have some control over compartmentalizing the chaos, the toys, the blankets, etc.

Well, right when you walk into our home, there’s a decent-sized space that’s been good for nothing for far too long.  I can’t even keep a straight face in calling it a foyer, ’cause it’s not.  It’s a nothing.  That’s all it is.  Nothing.  Except now it’s something.  It’s the play area.  You know it’s the play area because it has one of those colorful, puzzle-y play mats (that we were so fortunate to receive as a baby shower gift).

Perhaps you’ve noticed it in the background of some of Benny-boo’s pictures: 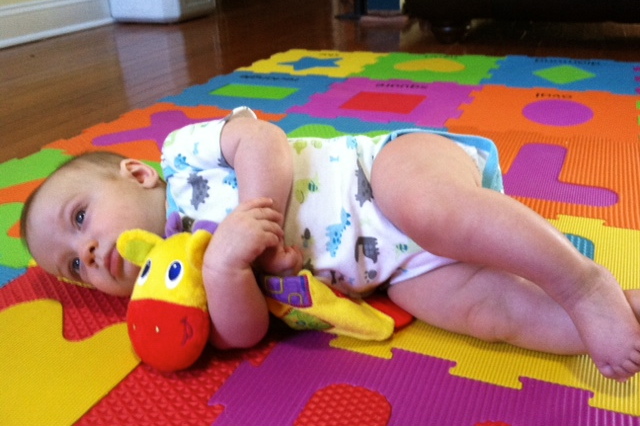 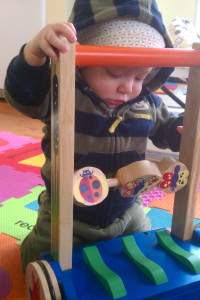 Well, you wouldn’t believe that this play mat was almost used as a tool to mentally unravel me.  Who needs torture when all you have to do is try what Brian attempted?

You see, the play mat comes with both the letters of the alphabet and several shapes as well.  It fits perfectly in our nothing, non-foyer play area when fitted together as a 5×7 puzzle.  Thirty-five pieces.

The puzzle mat came with 36 pieces.

After assembling it, we realized that we had one extra puzzle piece, so Brian suggested, “Let’s just throw away the ‘W’.”

Throw… away… ONE… letter?  But… but then it’s not a whole alphabet!  Emergency!  Emergency! Commencing meltdown in three, two, one…

Oh, it makes my chest tighten to think of it.  In recounting this story to Brian today, I asked to confirm that it was, in fact, the letter ‘W’ that Brian had suggested throwing away.

He shrugged, “I don’t remember.  It was one of those gay letters.”

Now, I obviously don’t approve of his word choice here, but if you’ve ever met Brian, I’m sure that this statement doesn’t shock you in the least.  I don’t happen to think that any of the letters in the alphabet are “gay” in either the modern sense of the word or the Christmasy “Don-we-now-our-gay-apparel” sense of the word.  They’re priceless, every one.  I mean, sure, the Q’s and the Z’s and the X’s are rarer, but that certainly doesn’t justify a toss out!  What if we treated diamonds that way just because we don’t use them as much?!  And, anyway, everyone knows that the rare ones are worth more in the world of Scrabble!  It literally makes me a little ill to think of which letter I’d throw out if I had to break up the alphabet.

So I put the octagon away instead.  Surely Bennett can wait a few years on the octagon.

Phew.  That was a close one!

If you had to toss out one letter, which one would you toss?

(Psst… If the mania has prompted a chuckle or a nod of understanding, head on over to Facebook and give ol’ Square Piece a “like!”)

There are 23 more days to submit your reply to enter yourself in Square Piece’s first contest/giveaway!  Don’t be bashful!  You can do this!