When introducing a musical act, normally you probably wouldn’t do what I did on Saturday.  Rather than highlighting Bradley’s career, accomplishments and unique style of entertainment, I merely told a square story that painted us both in somewhat of a silly light.

Now, we didn’t capture the very beginning which explained how I first discovered Bradley Hathaway in the first place, but the video picks up right as I said something along the lines of, “If you know me at all or read the blog, you know that I love the children’s book, The Little Prince.”  Please enjoy me in all my square glory:

Um, so when I was pregnant last year, I went into Anthropologie and they had a Little Prince pop-up book and I was like, ‘What?  There is still stuff for me here at Anthropologie even though I’m huge.’  So I was really excited; I got the book.  And I knew – and I even wrote about it at the time – that I was going to have a hard time letting Bennett touch the book when it came time because it’s MY pop-up book, not Bennett’s pop-up book.

And I wanna share it with him, and I want to share in the enjoyment of The Little Prince, and obviously children would enjoy a pop-up book, uh, but I don’t want him to touch it.  I want him to watch me touching it.

So I have a… a… an unusual… it’s really just a disappointing obsession with it.

So yesterday at work, the salon, you know they always do something for everyone’s birthday.  They got me a second pop-up book.  They didn’t know I had the first pop-up book.  And they were like, ‘Do you already have this?”  And I was like, ‘Well, I do.  But now I have one that Bennett can touch!  And I’ve got one for me and he can mess this one up!’

So I was really excited and I NEED two.

Bradley might not remember, but a few years ago at the music festival when I met him, I started lobbying for him to read The Little Prince because it’s really inspiring!  I think anyone who reads it will suddenly be, like, this incredibly enlightened person and be inspired to write poetry and music and all sorts of things.  He’s already good at that so it’d just even further fuel that.  So I’ve been lobbying for him to read it and he never does.  And so when he came in last night – uh, he and Brian got home after Brian picked him up around 1:30-ish, AM – and I had gotten Bradley’s room ready, and there was a candle and it smelled nice, and the room was clean, and the bed was made, and the sheets were clean, and I thought, ‘He’s a guy.  So maybe if I put the pop-up one here, maybe he’ll read the pop-up book.’  ‘Cause he won’t read the regular one.

And so I’m starting to get nervous that he might think I’m giving him – No!  Because I need TWO books!  I need one for me and one for Bennett.  And so I find a sticky, and I put a sticky note, and I’m, ‘This will inspire you.  This book OF MINE will inspire you…’  And I put it on the pillow.  Which is ridiculous.  But I just need to be sure that he doesn’t act like – ’cause if he acted like he thought it was his, I would have had to have let him have it.  So I need to make sure that that misunderstanding didn’t happen.

And so just in case you’re wondering if I lost the square piece, I sure did not.  And I went back to bed wondering if that was wrong of me, uh, for the next half hour because I had caffeine way too late.  Um, so that’s Bradley Hathaway.  He played a show…

Melody hollered, “Did he read it?!”

Me, “He didn’t get to the end.  He never does.  Um, so he played a show at our house last St. Patrick’s Day when I knew I was pregnant, Brian knew I was pregnant, and just a couple people knew, but we weren’t telling people yet.  And Brian let it slip to Bradley and Bradley knew.  So it’s kind of all come full circle.  It’s really sweet that he flew out here from North Dakota just for my 30th birthday party.  So I hope you guys have a good time and enjoy and, uh, feel free to shout out suggestions and requests and criticisms and encouragement.  But I hope you enjoy his flavor of art.”

But here’s what I was talking about yesterday about being “videogenic,” yet not “photogenic”: 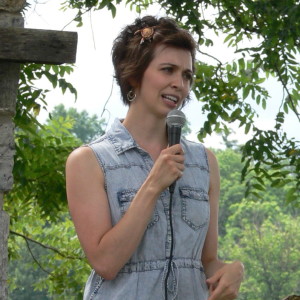 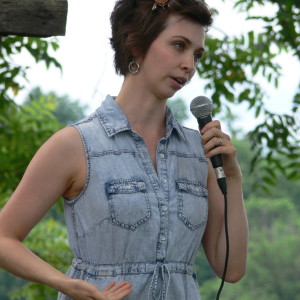 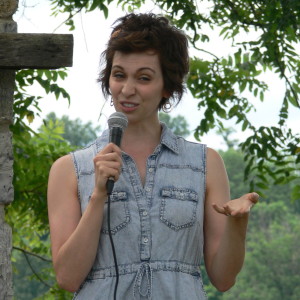