Especially at my in-laws’.

And I have a witness.

A couple years ago, my friend, Sherri, joined Brian and me having Thanksgiving dinner at his parents’.  The house was full, just as our plates were.  The conversation was lively;  and I only had to text Brian under the table once to be sure the content wasn’t offensive to our guest.  Even though we were all stuffed, the pumpkin pie was cut and distributed as if we weren’t.

Now picture yourself.  It’s a family dinner.  You’re leaning over your dessert.  You’re about to insert a bite of pie into your mouth when your crazy Uncle Bernie gets up and makes a scene.  Except there is no crazy Uncle Bernie.  There is, however, Brian’s stepdad, Doug.

Doug was in a particularly bold mood.  It could have been the turkey.  It could have been the beer.  But suddenly Doug reached the point of Enough.  Have you ever had Enough?  If not, then you haven’t been infested with stink bugs like the rest of us.  Those little devils come from out of nowhere and live and die in every nook and cranny of your house.  In fact, I bet if I got up right now and snooped around my living room, I could find a handful of stinkbugs myself.

That’s right.  The stinkbugs were the uninvited guests at this Thanksgiving dinner.  So what did Doug do?  He did this: 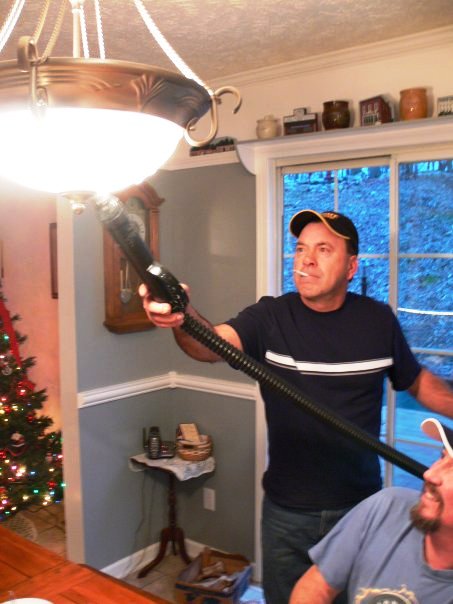 Yep.  Mmhmm.  In the middle of all the pumpkin pie festivities, with a cigarette hanging out of his mouth (and – what you can’t see – a can of beer in his left hand), he got out the vacuum cleaner and began to suck the bugs off of the light that was suspended right above our plates.  And as if this was too mild a matter, he proceeded to threaten the stinkbugs.  I believe his exact words were, “Don’t f#*% with Doug.”

Please forgive the poor quality of this photo.  But it all happened so fast!  It’s hard to think clearly and take excellent pictures when the hysteria of life is unfolding right before your eyes!