I thought it could never be done.

I thought that it’d be too hard.

I couldn’t imagine my life without it.

But here I am, 100% off of breakfast cereal.  Simply incredible!  If you love breakfast cereal like I loved breakfast cereal, then you have to know that this was a long time coming.  In fact, one of my favorite things about being a grown up was the no one could impose any rules that would prohibit eating Captain Crunch for breakfast, lunch and dinner.  As with most of my successes in life, weaning myself from those attractive cardboard boxes and the sugary treats within was primarily accomplished through the savvy means of distraction.

In fact, until I just sat down and thought about it, I didn’t even realize that it’s been months since my last bowl of breakfast cereal.  But come to think of it, I have been eating a lot more eggs lately… and oatmeal… and french toast…

Huh.  Well, how about that! 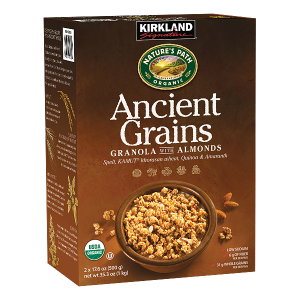 So long, Cinnamon Toast Crunch.  So long, Muffin Tops (the cereal, not the roll around my midsection).  So long, Honey Bunches of Oats.  So long, Mulitgrain Cheerios.  You’ll forever remain in my fond memories and I’d still indulge in you faster than a slice of cake.  But the fact remains, we’re trying to transition to a diet of recognizable foods.  And, well, ya just ain’t natural.  But I’ve discovered a handsome cousin of yours.  Perhaps you’ve heard of him.  He lives on the island of Costco and, while he might not be perfect, he’s got a lot going for him.  So when I need that bowl of indulgence, I’ll be letting him satisfy my breakfast cereal cravings.