Remember how Square Piece has categories, one of them being INCIDENTS (like The Mint Incident) and one of them being THE HUSBAND FUNNIES (like this one)?  Well, I had to get Brian’s permission to blog today’s entry.

The deal is, friends, that Bennett knows what’s up with Santa.  This was not a sobering or disappointing conversation.  No, this was a celebration that I’m Santa, Daddy’s Santa, and he – even he! – can be Santa, too!  It’s exciting to my mommy heart that Bennett’s can focus on being a giver, a carer, and a Jesus-birthday celebrator this time of year.  It feels so free!  We’ve got a special kind of magic going on over here.

About a week or so ago, a new conversation went like this:

Me: “Hey, Bennett.  You know how bad guys sometimes go to jail?”

Me: “Well, did you know that some of those bad guys are mommies and daddies who have boys and girls just like you?”

Me: “But the parents are in jail.  So who’s going to be their Santa?”

Me: *stifling a chuckle* “Maybe.  But would YOU like to be their Santa this year?”

And so began the conversation about Prison Fellowship’s Angel Tree and the precious tags to be claimed off of them.  So off to Facebook I went to inquire where I could find one of those trees this year.  Someone gave us the hot tip that a local Chik-Fil-A had one.  Perfect!  (As it turns out, there are TWO Angel Tree drives, and this one was actually associated with Salvation Army, not specific to children of incarcerated parents, but children nevertheless in need of assistance.)  I was notified that they were going to need the gifts returned by December 6th, which doesn’t give me a lot time to bring Bennett to look over the tags, choose a child, shop, return, etc.

The morning of Black Friday, Brian got off of his second straight night shift, totalling 25 hours of work Wednesday and Thanksgiving night.  Did that deter him from daring to brave the crazy over at Best Buy?  Heck, no.  Not when a cheap television was sweetly calling to him.  (From time to time, we have to bang our TV to get the picture so show back up again.  Otherwise, I’m stuck listening to Friends like it’s the radio.  Anyhow…)  While he was there, and thinking he might enjoy getting to be a part of this, I sent him this text about grabbing an Angel Tree tag from a very nearby Chik-Fil-A.  He didn’t seem to mind swinging by and was home shortly thereafter.  (I’d block his number in this pic, but Brian actually really loves hearing from good people.  It’s one of our greatest differences.  I hate talking on the phone, but you can call him.) 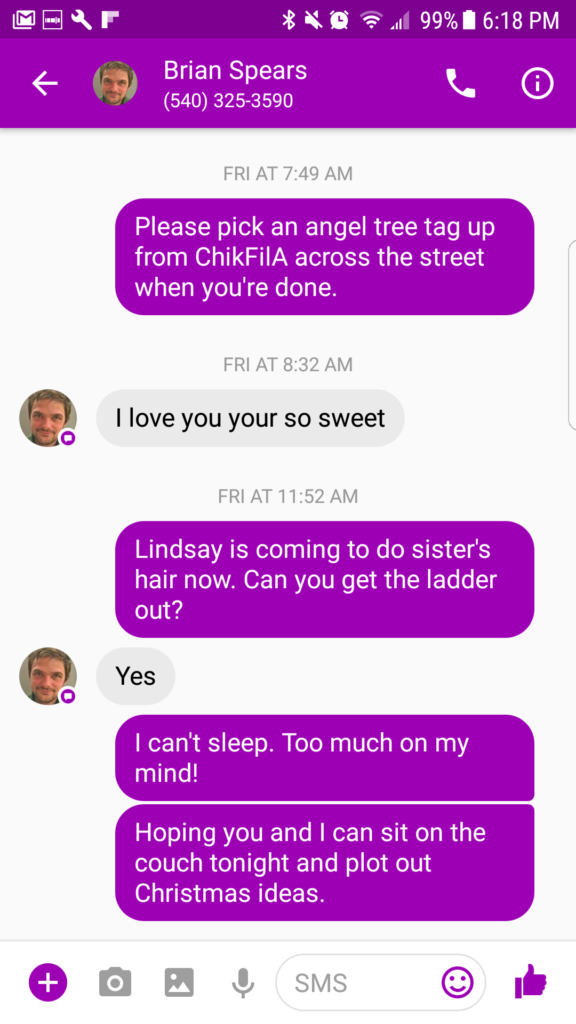 We looked over the tag and I started mulling over when, where and how Bennett and I will execute this shopping trip.  It wasn’t until later that night that Brian told me what really happened at Chik-Fil-A. 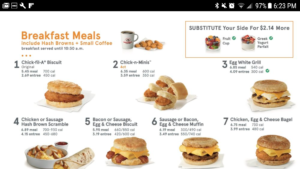 Brian thought I wanted something from the breakfast menu and didn’t want to get out of his van.  He literally pulled up into the drive-thru and and ORDERED AN ANGEL TREE TAG.

You guys.  C’mon.  Can you picture the back-and-forth confusion?  (Tears have streamed down my face over imagining this scenario!)  Eventually, once everyone understood each other, the manager came out and handed Brian an Angel Tree tag.  See?  Already generosity has paid off!  Whatever we spend on this angel, it was TOTALLY worth it!

*Disclaimer: After reading this, Brian has clarified that he did not think the Angel Tree tag was a breakfast item, but perhaps some special or kid’s toy that was a current Chik-Fil-A promo.  I promise this is not how it sounded two days ago, but I’m going to choose to believe him.