Well, I guess it’s time to finally admit something.

Before you read this, you have to promise to read the entire post in its entirety with the understanding that this story has a very, very happy ending.

*bracing myself for disapproval*

We are on Day 7 of being a household with just one dog.

*holding my breath while you process this*

Let’s go back to the beginning, shall we?

Brian and I have had Esther since she was a wee pup.  One of my clients was aware of the fact that Esther is not fixed because we’d love it if she could have puppies one day.  This particular client got us in touch with a man  she knew, Doug, who needed to find a home for his basset hound, Beauregard.  Though she wasn’t sure if Beauregard was fixed, she figured it was worth looking into.

You see, Doug’s situation was overwhelming.  This was both he and his wife’s second marriage.  They had four (or five?) kids between the two of them, three dogs, an infant on the way and they lived in a townhouse.  Talk about cramped!  Doug was finding a home for Beau not because he didn’t love Beau (on the contrary, he’s had him since he was a little puppy himself), but because their lifestyle needed some relief.

Beau was fixed.  But once Doug sent us pictures of him, we got all mushy-gushy over the hound and decided to give him a chance.  He and Esther spent a trial week together and got along like good ol’ pals.  He seemed to have a calming affect on her separation anxiety; and Beau was especially happy to have a nice backyard in which he could run around and be silly.

Here we have Beau “helping out” as one of our boxes of dog treats busted open from the bottom: 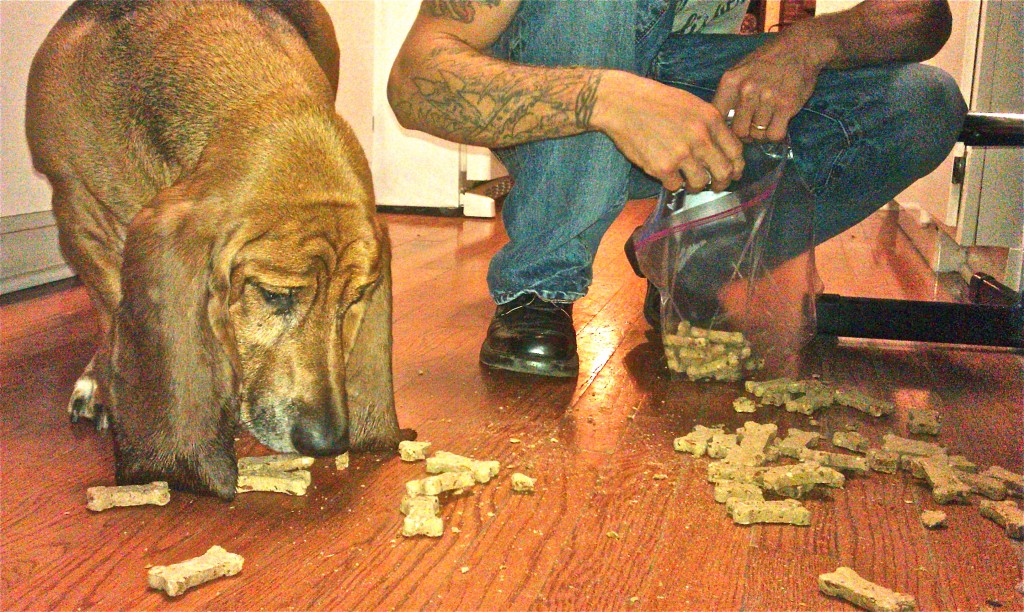 Now that I’m pregnant, however, certain issues about Beau seemed to be glaring red flags for me.

First, the odor.  Beau and I could hardly be in the same room with my new and improved sense of smell.  You could give that dog a bath one day and he’d already be stinky the next.  The poor guy can’t help it.

Secondly, I was beginning to get concerned about having an accident with Beau.  Let me explain.  When he drinks from his water bowl, Beau leaves trails and puddles of water from the bowl to wherever his next destination is.  While we’ve been diligent to clean up after this mess for several years, on many occasions these trails have almost resulted in utter catastrophe.  For instance, I’d head to the kitchen in my bare feet for a glass of water and nearly fall on my butt for slipping in his slobbery puddles at night.  (Picture a cartoon version of me wiping out.)  I’ve been able to catch myself thus far, but I was beginning to be concerned that when I get bigger, it will likely be harder to keep my balance and I or the baby could get seriously hurt.  (Not to mention that one day a baby would be crawling through the puddles…)

On a similar note, when I walk the two dogs, though Beau is 75lbs., I’ve always had the strength to hold him back if, in his excitement, he saw a dog and wanted to barrel in that direction.  But the other morning he was nearly dragging me across the sidewalk to get to another dog and I thought, “I can deal with this now, but this is going to get a lot harder when I get bigger.  What if I lose his leash or end up falling?”

(Another concern about his size was Beau’s complete ignorance to it.  He’ll sit on any living thing and be entirely convinced that he’s light as a feather.  It would not be a stretch to imagine Beau sitting on and smothering a baby.)

That same night I was in the living room taking my daily supplements when I heard commotion in the kitchen.  There was the sound of Beau crunching down on his chow, while Esther was pathetically whining.  Leaving what I was doing, I wound up babysitting them in the kitchen as Beau had been trying to intimidate Esther from eating her food.  Though Beau finished his dinner early and wandered off, I stayed in the kitchen until Esther was done eating.

Unfortunately, during that time Beau had found my Sunday through Saturday pill box in the living room and had eaten about a week’s worth of my supplements.

Great, Beauregard.  I hope you have a really nice uterus.

It’s been instances like that (not to mention his pleasure in the litter box, cat puke and trash confetti parties) that make me feel like I’m constantly on his back.  Knowing that my attention is going to be fixed on a newborn soon, it began to occur to me that I might not be able to keep up with Beau.

Being that I still had his original owner’s email address, I decided to reach out to Doug before pursuing finding a good home for Beau.  In an email, I explained our situation and that I wanted to offer Doug the chance to reclaim Beau before moving forward.

Beauregard was his puppyyyyy.  Doug really missed him!  And in the last couple of years, the family had moved to a new, larger home with a fenced in backyard!  Apparently when Doug moved into that home, with a sadness in his heart he said, “This yard would have been perfect for Beau.”  Doug was eager to have his boy back and picked him up last Friday.

Brian and I were happy.  Doug was happy.  Beau was happy.  And Esther couldn’t have cared less. 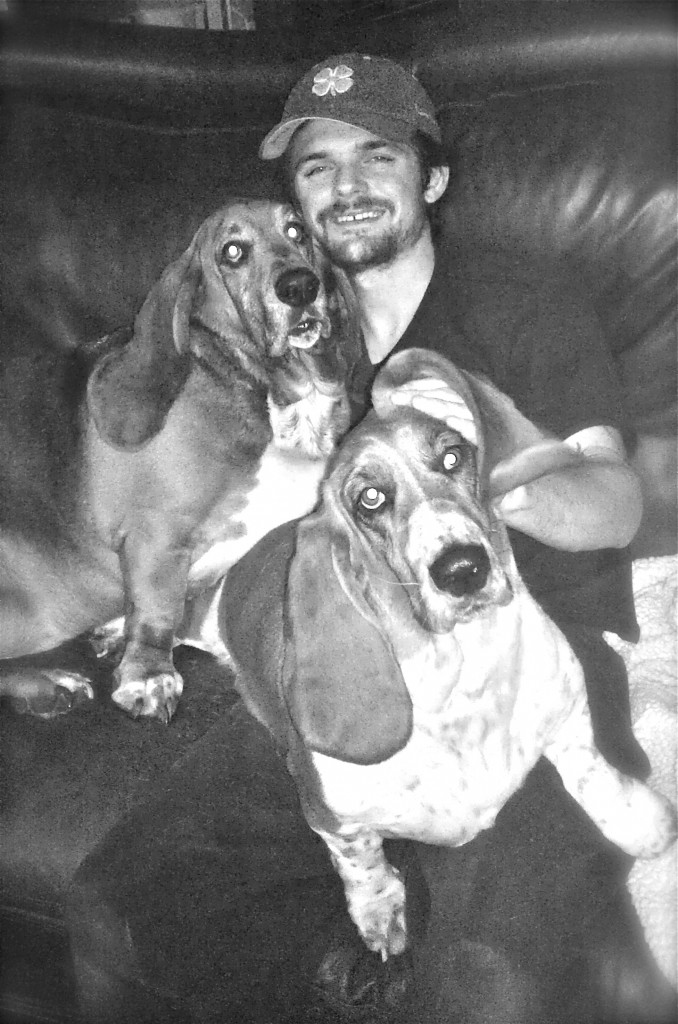