Taking full advantage of the one day a week in which both Brian and I aren’t working, we decided to take the babe and brave the traffic patterns of D.C. yesterday.

So what on earth could have possibly pulled Suzy Homemaker out of her comfort zone?  What was worth the hair-raising adventure of competing with the tourists to find a parking spot in D.C. on a sunny Saturday? 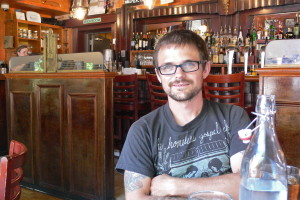 There’s this restaurant I’ve been wanting to try out for a couple of years now.  What’s so special about Café Saint Ex?  Well, it’s named after Antoine de Saint Exupery, the author of The Little Prince.

You guys know how I feel about The Little Prince.  I mentioned it here, here and here.

So I thought it’d be nice to start the summertime tradition of having a Little Prince Day with my little man, Bennett.  Whether it’s Café Saint Ex or not, I picture us getting away, curling up in a booth and reading the book from cover to cover over lunch. 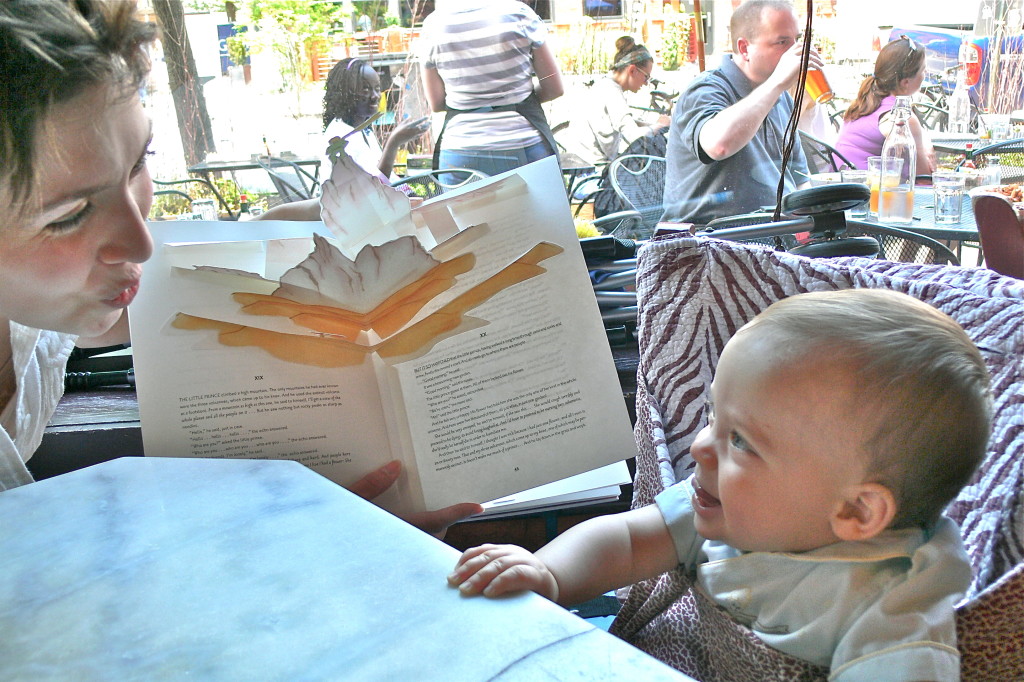 Bennett could NOT have been less interested.  I tried everything to get his attention.  And I even brought the pop-up book!  *sigh*  Maybe next year. 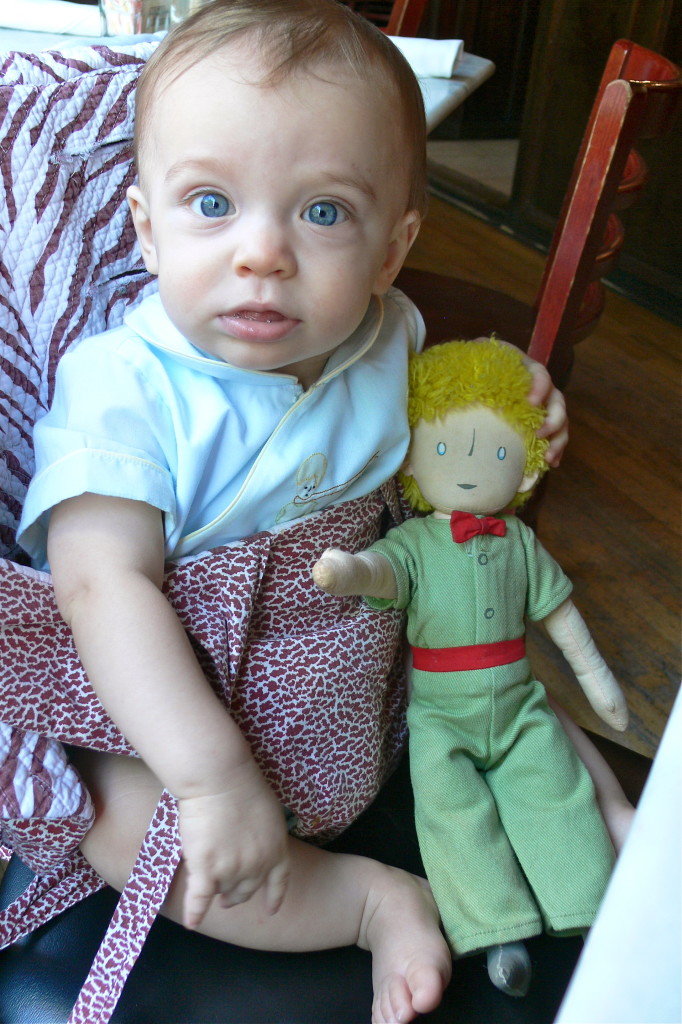 While he might not have realized the theme (we brought along our Little Prince doll and he wore his Little Prince romper which was made by our friend, Leslie, of Rosebasket), what he did enjoy was flirting with the ladies.

It’s different going out with a kid.  There’s so much more baggage required.  Even though it was a beautiful day, we decided to dine inside.  I was pleased to be seated by a ledge upon which I could put the umbrella stroller, my phone, Bennett’s insulated lunch sack, etc.  And while this was perfectly convenient for me, it hadn’t occurred to me how this might appear from the perspective of those dining outside.  Unbeknownst to me, Bennett’s lunch sack was making an impression on 14th St. with a bold, handwritten note stating:

This was amusing enough to warrant a discreet photo snapped by a fellow diner.  Her name was Liz.  And while she had intended to secretly capture the humorous breast milk sign, she ended up capturing a beautiful and candid shot of our family’s first attempt at Little Prince Day.  There Bennett was, looking outside, hoping to lock eyes with someone who might also be interested in flirting.  There I was, thoroughly amused by and proud of my social baby, just realizing what was about to happen.  And there Brian was, quite contently looking on at his son gaining new adorers. 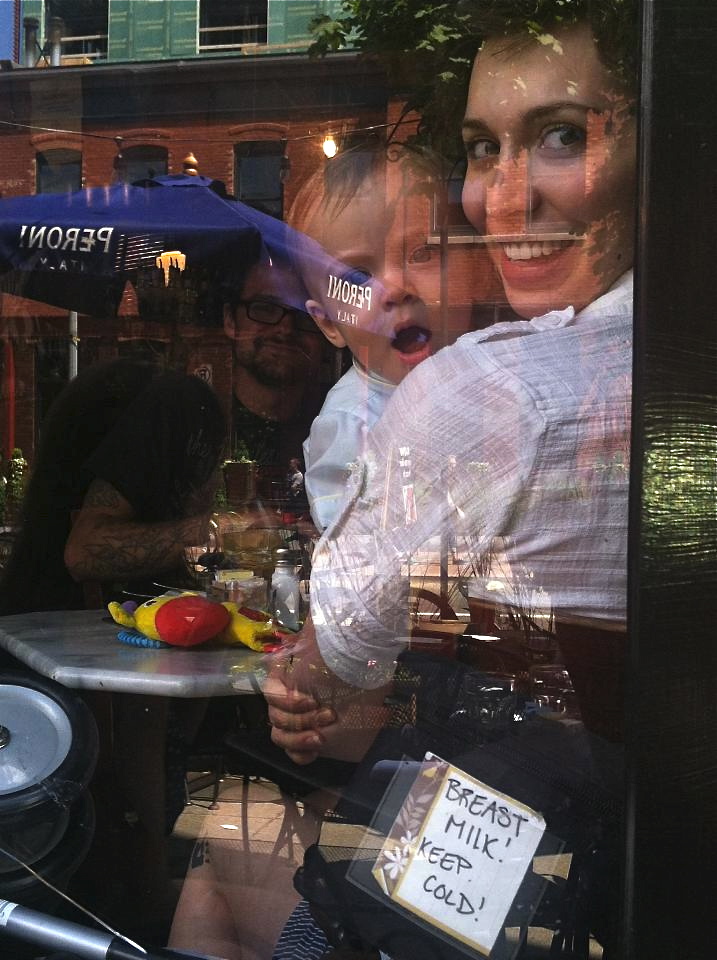 So interesting was this shot with the buildings reflected in the glass, the umbrella, each one of our expressions… so interesting and artistic was it that Liz actually came inside and asked if we’d like the picture!  She texted it to me and I couldn’t have been happier!  My camera’s viewfinder is broken, so when I take pictures with it, I’m just hoping and guessing at the turnout.  In one split second, Liz took a better picture with her phone from outside than what I had been trying to capture throughout the whole meal.

So Café Saint Ex?  Not bad.  Our waitress was just a sweetie pie.  The food was tasty.  The atmosphere was chill.  The establishment definitely is a reflection of the author (who was also a pilot) and NOT a shrine to The Little Prince.  Didn’t even see one shred of a reference to the children’s book actually.  But still… Pretty cool.

Bottomless mimosas are pretty cool, too.

And the creative use of goat cheese.

And that dessert there at the top.  Mmmmm… 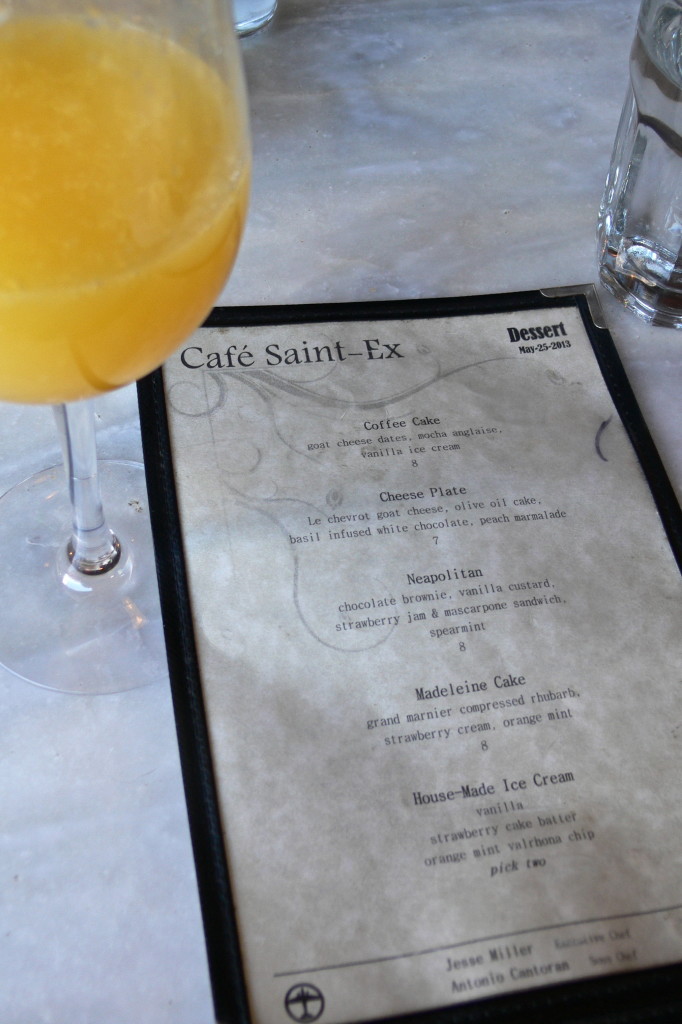