So I have to train a new personal trainer.

CJ claims that he’s found a better opportunity at a new gym.  (At least he won’t have me bossing him around anymore.)  So I’ve tried out two new trainers, Chris and Marcus.  Chris kicked my butt on Monday.  He had me doing all sorts of exercises that I’ve never even seen before.  Just one problem.  Chris is awfully quiet.  And while I tend to have a strong preference toward the peace and quiet in life, being in the context of a gym workout would be the one glaring exception.  The way I see it, if I’m paying you to work me out, I’m also paying you to distract me from how much I hate working out.

God love him, Chris’ reasoning for being quiet is that he’ll lose count if he talks.  All right.  That means I’m left with my own thoughts for 15 repetitions.  And the thoughts go something like this:

So yesterday I met Marcus.  Marcus, I’d like to point out, has dreadlocks past his waist.  In my book, he’s gotta be good people, right?  Marcus’ intention was to evaluate my level of strength and fitness through a certain order of exercises. Well, this normally takes place in the basketball court; but the court was shut down yesterday.  The next option would have been the classroom; but the classroom was occupied.  So our only other alternative was outside, on the sidewalk, between the gym windows and the crowded parking lot.  Thank God I’m not easily embarrassed.  If I was easily embarrassed, I probably would have wanted to melt into the pavement when he had me running forward and backward in front of the entire world.  I hate running.  And as if that wasn’t bad enough, I wasn’t running on my own.  No, that would be too easy and too kind.  Marcus had some rubber rope doohickey wrapped around my waist and he was holding on to the other end of it while I was running.  This exercise definitely resembled a horse and buggy, where I was the horse and he was the buggy.  Kinda like this, but daintier and much more public: 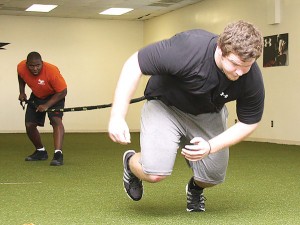 You do realize, I hope, that not only was I running and dragging this man around, but that all the resistance resulted in me running in slow motion.  No, that’s not humiliating at all.  The good news, though, is that Marcus talks a LOT.  Which, if you’re going to tether me to yourself and make me run in slow motion, you’re definitely going to have to work double time to keep me from hearing my own thoughts on the matter.