For several years now, I’ve been hairstylist to the White family.  It’s been a delight to get to know Beth, Henry and their two sons.  Last year was especially sweet as Beth and I were electric with joy and anticipation, both of us pregnant, she with her third and I with my first.  Naturally, I peppered her with questions, drawing from her wisdom and experience, comparing and taking notes.  When her son, Connor, was born in July, the White family was sweet enough to bring him to one of Beth’s appointments and I was honored to meet the little guy.

Needless to say, during my maternity leave, when I caught wind of the fact that Connor had a brain tumor, I was devastated, hoping for the best, praying that this would just be a scare.  Unfortunately, as Henry so eloquently put it, this was a nightmare from which he’d never awaken.  Connor passed away at six months old, all options exhausted.  Mourning this tragic loss, our salon participated in a memorial balloon release, posted here.

It was hard coming back to work knowing that their lives had been utterly flipped upside down in my absence.  Not one to shy away from awkwardness or discomfort, the minute that I had a moment with both Beth and Henry, I immediately shared my condolences and sorrow for the loss of their son.  There’s no denying that these parents didn’t seem like the Beth and Henry that I knew pre-Connor.  Eyes seeming more distant and light-heartedness all but lost, with each appointment, I carefully and intentionally always left room and opportunity for them to discuss their grief, their memories, their new normal.  Naturally I never wanted to pry, but it was important to me that my station be a safe place where any mood would be acceptable.

Imagine my delight when I began to see a new hope and a new resolve in their eyes!  In less than a year since Connor’s passing, Beth and Henry pulled off an exceptional gala with a very specific goal in mind: to raise enough money to fund a clinical trial through POETIC, testing a new agent that appears to target one of the main drivers of the development of ATRT (the tumor that Connor had) and several other cancers.  Given the weight of their loss, they don’t want to see any more babies die.  Period.

In preliminary testing, the drug (not yet approved by the FDA) showed remarkable results.  Even more encouraging, when the drug was stopped, the tumors did not regrow!  It’s rare for a drug trial to be designed specifically for pediatric patients.  Given that each trial costs over $10,000 per child, Beth and Henry’s goal to “fully fund” the trial was bold to say the least!

So the gala?  Brian and I arrived right around 6:30PM on Saturday night to the Mayflower Hotel in Washington , D.C.  An open bar nicely complimented the tasty hors d’oeuvres while men and women dressed in cocktail attire admired and perused the 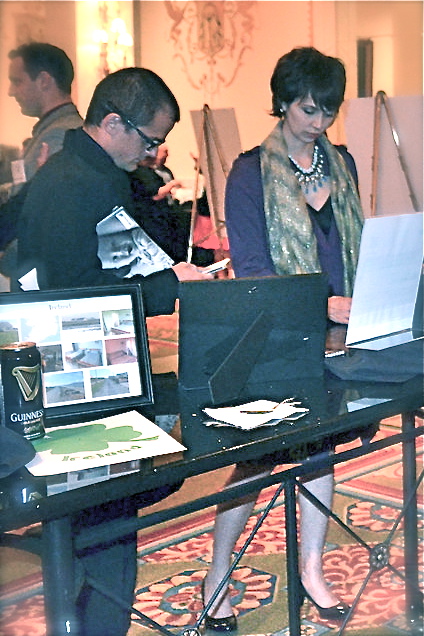 extensive silent auction display.  Per Beth and Henry’s request, even though I don’t perform the Brazilian Blowout anymore (a $450 hair smoothing service), I agreed to donate the service to their cause.  All items were bid upon silently and electronically, with the auction ending at 8:30PM.

Throughout the following dinner and dessert, we heard from various speakers, from Connor’s doctor to Hall of Fame Redskin, Charles Mann.  Henry himself mentioned that he hadn’t personally spoken in front of an audience of that size since his son’s memorial service in January.  The evening ended with live music from The Reagan Years, some people mingling, some dancing.  In spite of the serious nature of the gala, it seemed that everyone succeeded in making the best of it and having a good time. 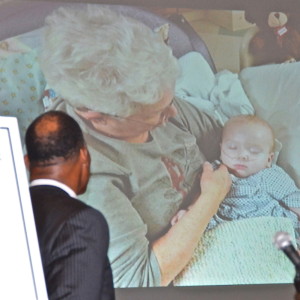 In terms of numbers, Beth and Henry are pleased to have reached their minimum goal of $150,000.  (WOW!)  But being that September is Pediatric Cancer Awareness Month, they’re still hoping to reach their higher goal of $175,000, which would cover the expenses for two more children to participate in the trial.  As Brian and I walked around the silent auction, we noticed informative table frames such as this one: 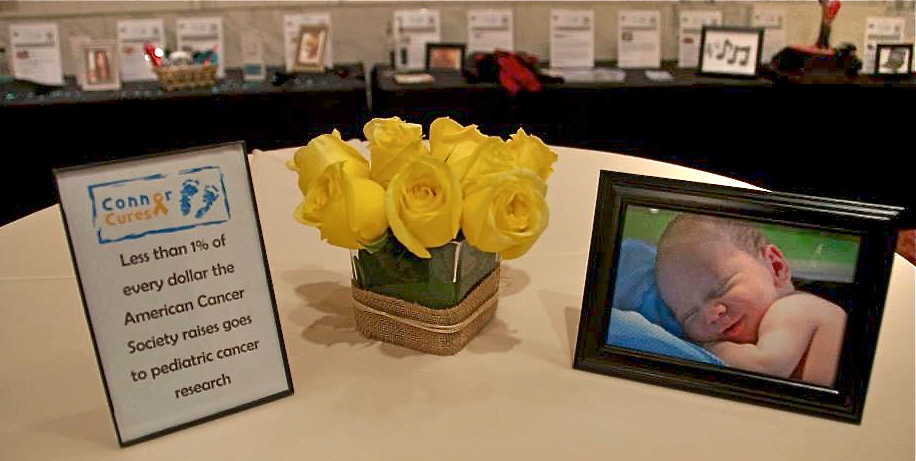 Did you read that?!  I had no idea that less that 1% of every dollar that The American Cancer Society raises goes to pediatric cancer research!  Whoa!

So whatdoyathink, folks?  Can we all spare one Starbucks this week and donate at least five bucks to the cause?  Every little bit helps!  If you’ve got a big heart and some change to spare, any amount is accepted and appreciated here.

Stay tuned tomorrow for the personal, silly, square and honest account of our first, major date night.  (In other words, get ready to feel a little sorry for Brian having to put up with me.)