You read that right.  I mean COOKING cupcakes.

Apparently my problem all along was that I was attempting to bake cupcakes like a baker, measuring carefully and following the directions.

But then something happened.

Here’s the thing (brace yourself, because this isn’t going to seem like it’s about cupcakes for a second, but it is): Have you ever sat through a church service and felt incredibly uncomfortable when the offering plate was passed because A) you left your tithe check at home, B) you couldn’t afford any offerings that day, C) you needed someone to break that $100 bill for you? 😉 It’s so awkward thinking that other people might be watching and taking note of whether or not you put something in the plate, isn’t it?!

Well, at my church, the plate doesn’t get passed.  It used to, but a while back they decided to leave discreet, wooden, money-podium type doohickies at the entrance for people to give in a less showy way.  First of all, our services are usually about two hours long, so anything to cut down on the length is kinda nice!  But secondly, and more importantly, we don’t believe in being motivated by the “fear of man” (“What will they think of me?!”), but want our members to give as they feel led by the Lord.  Not surprisingly, giving is down because we’re not collecting money from the people who are digging deep into their pockets merely out of guilt, embarrassment or peer pressure.  That said, with giving down, we can’t really afford the treats and snacks at the hospitality table for the time being.

You know what that means?  That means no cupcakes.  …Kinda.

Of course, anyone who wants to bring goodies is welcome to set them out.

This turn of events resulted in my being freed of a self-imposed responsibility and gave me a renewed delight in cooking just for the heck of it.  And, since I was preparing cupcakes just because I wanted to and not because I had to, last Sunday I decided to make them my way, the cook’s way, NOT the baker’s way.  The cook’s way looks like this:

Bake: 20 minutes (No, bake till you can smell them and they look right.)

Allow butter and eggs to stand at room temperature for 30 minutes.  (Thirty minutes?  How about overnight instead?)  Grease and flour two round cake pans.  (Line 3 muffin tins with cupcake liners.)  In a bowl stir together flour, baking powder, and salt.  Set aside.

In a mixing bowl beat butter with an electric mixer on med. to high speed for 30 sec.  (Including my oil.)  Gradually add sugar, beating until well combined.  (Dump in all the sugar at once, then beat it.)  Add eggs one at a time, beating well after each addition.  (Dump in all eggs at once and beat it.)  Beat in vanilla.  Alternately add flour mixture and milk, beating on low speed after each addition just until combines.  (Dump all of the dry ingredients and the milk in the bowl, not alternating, and beat the heck out of it.)

Then I decided to throw in a bag of Ghirardelli white chocolate chips.

Would you believe that the cupcakes made me go, “mmmmm”?!  That’s ALL I’VE WANTED all along!

One peculiar observation.  A while back, once I ran out of the cupcake liners that I usually purchased at Michael’s, Brian picked some up for me at Five Below.  I used the leftover short ones (Five Below) in the same pan that I used my new Michael’s ones (the tall ones). 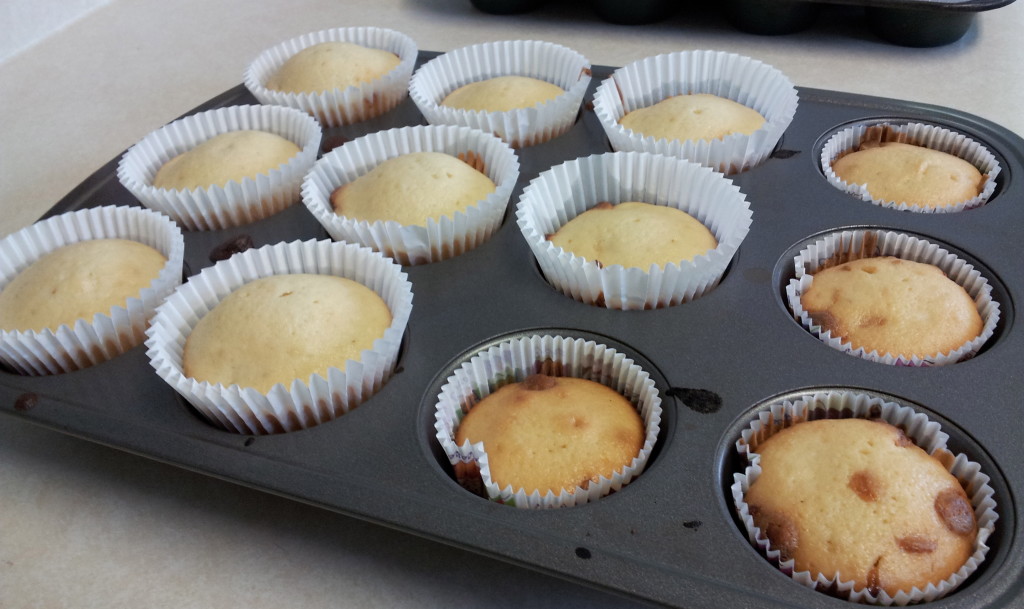