Fact: Brian treats me better than I treat myself.

When I was sick last week, I asked him to bring home more facial tissues.  Typically, if I was shopping for myself, I’d purchase whichever tissues were on sale.

They’re all the same, right?

But the tissues that Brian brought home?  The first one that I used felt cold on my nose.  Cold…  but niiiiiiiice.

They must be cold because they were just outside in the car.  So soft!  Sure beats the box of tissues I just finished and the paper towels I’ve been carrying around.

Granted, while Viva paper towels are super soft for paper towels, the fact that I was resorting to rubbing vaseline on my sad, raw nose should have told me something.

Okay, but back to the Kleenex that Brian brought home.

I looked at the box again.  Cool Touch.

I don’t know how they did it, but – wow! – every single tissue is so soothing because they all feel like they’ve been chilled!  So nice!  Did you know such things existed?! 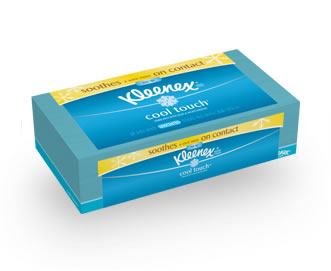