Momma has a sixth sense.  She figures everything out before I ever let on, saying she ‘had a feeling.’  We never succeed in fooling her come Christmas time!

On my way home from my holistic doctor yesterday, I called Momma and right off the bat she informed me that she had just read an article stating that women who exercise too frequently/vigorously have been known to have problems conceiving.  She “just wanted me to know.”  I assured Momma that I hate working out and that on a good week, I might hit the gym twice.

This is great!  She wouldn’t be having this conversation with me if she thought I was pregnant!

When I asked her if that’s been on her mind (‘that‘ being ‘grandbabies‘), she casually replied that it didn’t make a difference to her one way or another.

Five more days until she (and all of our family) find out.

In other news, apparently pickles and ice cream is NOT a myth!

My doctor soothingly told me that as long as I eat everything in good moderation, it’d be okay to have a slice of deli meat here and there, just not allllll the time.

Well, baby needed Subway.  You know how I like my Subway sandwiches.  I’m quite particular and almost never veer from the usual order.  These days, however, everything is getting juggled around.

First of all, I didn’t want cheese.  (I don’t think I’ve EVER declined cheese on a sub.)

Second of all, I didn’t want lettuce, spinach, tomatoes, olives or mustard.  (What!?)

Just toasted, cheese-less, bread with a thin slab of cold cut meat, cucumbers and LOTS of pickles with oil and vinegar.

This was essentially a pickle sandwich.

Still on the road, with my pickle sandwich about 10 minutes into digestion, I pulled into a gas station thinking that I needed juice.  Upon eyeing every single beverage option that Sheetz offered – and feeling ‘blech’ about them all – my gaze landed on the milkshake machine.

That milkshake was gone in about three minutes.  (I paid the price later.)

There you have it.  I just succumbed to pickles and ice cream.

>I’ve been getting extra pickles on everything ever since.<

Later that day we had our first sonogram.  Our doctor wanted to be sure to be able to measure our baby early on, confirming conception and how far along I am.  Being that my cycles have always been five week cycles instead of the more typical four, this was actually pretty important in figuring out our due date.

We learned that at 16mm long, our baby was exactly at eight weeks yesterday.

Brian was wonderful about joining me, but a little alarmed when he realized that this particular sonogram would not be the kind with jelly on the belly.  No, there are other, more invasive and embarrassing ways to do sonograms these days.  If you have any questions about that, just look to the left of me in the picture. 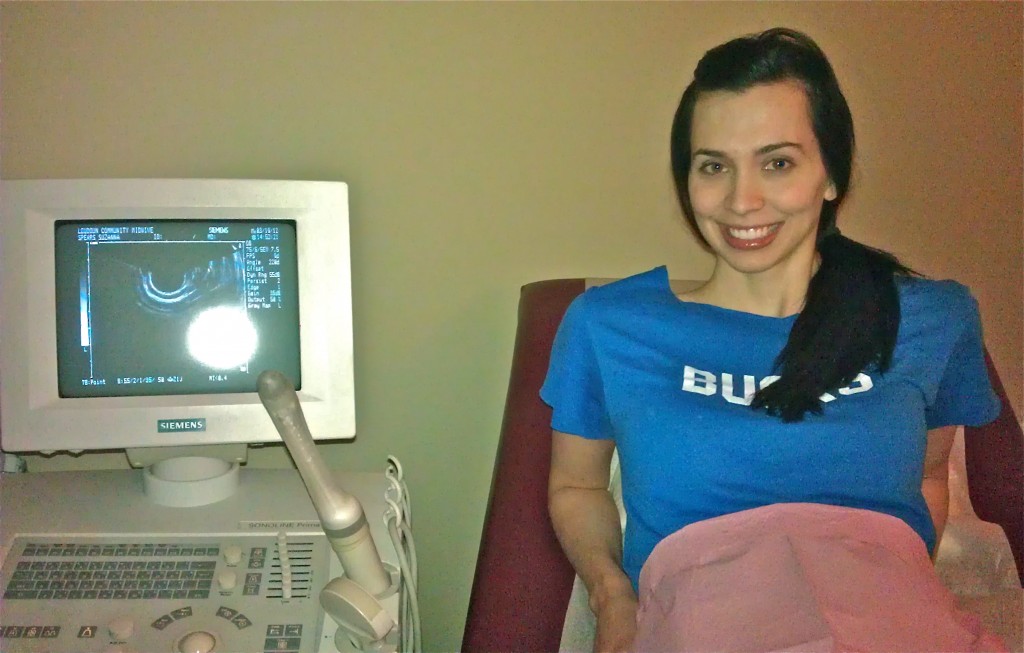