This could be a false memory, but hear me out: When I was a little girl, somebody put a blob of cooked, leafy greens on my plate.  Already liking spinach, I didn’t hesitate to dive in.  Unfortunately, this was not spinach.  This was spinach’s evil cousin.  Now I’ve gone my whole life believing that it was kale, but thinking back, I’m fairly certain that Ma was using the words “kale” and “collard greens” interchangeably.  Until last year, I hadn’t even realized that these two leafy greens are not the same!  This left me paralyzed in fear, puzzled as to which green was the greater offender, wondering which one I should try again.  ‘Cause, ya know, kale is so trendy right now, the “super food.”  Supposedly it turns regular humans into super humans.

Well, I wanna be super.

Everywhere I go, everyplace I turn, people are singing the wonders of kale like a Disney musical.

For this reason, I’ve avoided it like the plague.

I can’t try it until I’m trying the best, most foolproof recipe there is!  If I don’t like it on the first go-around, I doubt I’ll ever try it again, I’ve been thinking to myself.  No pressure, but the first taste since childhood needs to be epic or there’s no going back. 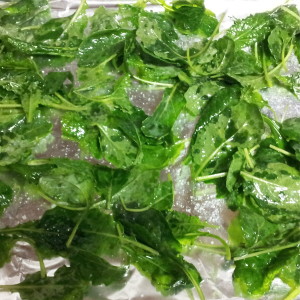 Several people have suggested that I begin my kale journey with kale chips.  What better way to enjoy a healthy, super food than dousing it with oil and salt, right?

So last week I picked up a package of baby kale.  Baby kale’s flavor is supposed to be somewhat milder, so I thought it best to go that route.  Before I tossed my baby kale in olive oil, I timidly tasted one raw leaf.

Hmmmm!  I’d easily eat this as a salad!  Kinda like spinach, but saltier!

That realization should have curbed my generous salting of the kale chips.  Next time I’ll know better.  After about 12 1/2 minutes in a 350 degree oven (with a moment to shake things up midway), I had delicious, somewhat-too-salty kale chips! 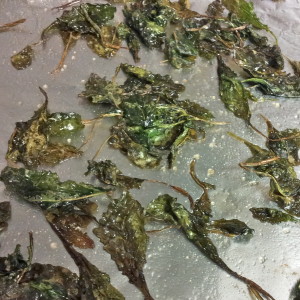 I canNOT believe I’ve been such a chicken for so long.  It must’ve been collard greens that I hated all along.

But given the fact that Brian won’t help me finish them (he likes the flavor, but not the “look” of them), I crushed some up and tossed them in a chicken salad instead of using more salt.  Bennett also had some steamed, pureed and mixed with chicken and veggies.  Looks like we’re gonna be a kale-eatin’ family now!  I wonder what superpower I’ll develop…