This must be some kind of unfortunate record for Square Piece.  It has been far too long since you’ve gotten a goofy update from me!  Let’s close the gap, shall we?

Oy.  Given the reality that my brain isn’t as quick as it used to be, we’re going to start with the ‘right now’ and think backwards.  Right this very minute, my toesies are kicked up on a foot rest mostly because I made an immature shoe choice for the day.  Having been a hairstylist for nearly 11 years, you’d think I’d know by now.  And I do…

Just left of my feet is a mason jar of red wine.  But a fancy mason jar.  The goblet kind.

Strangely enough, Bennett passed out for the night around 7:00PM.  The kiddo skipped his nap and practically fell asleep in his high chair at dinner.  I’d prefer he not be in a high chair, but at the kitchen table, at his age.  Unfortunately, the salon/garage conversion is still dragging on at a glacial pace.  Our kitchen table remains rejected in a storage facility, but is kept in good company with all the Christmas decorations.

Since my last salon update, our front glass doors have been installed, a tad more plumbing has been finished, and some electrical has been completed (outlets/lighting).  Corinne is doing so well in terms of technique and intuition.  The two of us thoroughly enjoyed a three day hair show in Richmond last weekend.  The education was quite refreshing.  Believe it or not, even I saw hair techniques that I had never seen before!  There is ALWAYS room for growth, my friends!  (I’ve signed us up for two more days of classes in November!)

I might be doing hair in my kitchen, but according to the “glasses” that I’m wearing, I’m working in a high end, cutting edge salon that values education, growth and customer service!  No need for the scenery to change that.

But speaking of a scenery change, I finally got my butt back to Winchester for a check up with Dr. Bartlett (my “which” doctor, not to be confused with “witch” doctor).  Remember when I got intense leg cramps during my pregnancy and EVEN during Bennett’s delivery?  Well, they’ve never really gone away.  I’ve just gotten better at holding them off when I feel them coming.  The last couple of months, however, they’ve really picked up in intensity and I’ve found myself waking up to the “almost Charley horse” three or four times a night.  No good, folks.  No good.  This has been so bothersome, that as I was leaving her parking lot, I began ripping the whole food supplement boxes open and popping those pills right there in the car.  Can I tell you that I haven’t woken up to a leg cramp NOT ONCE since that appointment?!  It’s like a miracle.

Moving on…  Brian and I have been attending a new church for about two months now.  I’m too skittish to claim it as my own and, you know, “put a ring on it.”  But it’s all good, folks.  We’re not trying to stage a revolt or a walk-out or anything with our former church.  We love our friends there and care to maintain those relationships.  But now that I’m a mommy, there were just some very specific elements (shocking, I know) that I wanted incorporated into Bennett’s church life.

Anyhow, I forget sometimes that there ARE people out there who don’t know a thing about me, don’t get my humor, don’t read the blog (*tsk* what a shame).  The other night, Brian, Bennett and I headed over to try a “small group” (which is kind of like an in-home Bible study with people with whom you’ll eventually want to be very transparent and hold accountable).  Here’s the thing about we Spears: We hate going to small groups.  We’ve often joked about starting a small group for people who hate small groups.  It’s not the concept itself that we hate or even the people, but the fact that we’ve never successfully been able to commit to one long-term small group due to work and scheduling conflicts.  Our experiences in and out of small groups have always been too brief to allow the deepest, lingering effects we would hope to experience.  It’s hard to absorb the moment when you’re feeling rushed, stressed, exhausted, etc.

And yet, still, we’ve tried again.

So here we were, seated at a table, contentedly stuffed with a potluck dinner, carrying on a group discussion.  Being led through various questions, eventually we came to one that asked for someone to read James 5:16.  Now, listen, Square Piece LOVES James 5:16.  I’ve had it memorized since I was thirteen years old and have even had my tattoo artist draw up a James 5:16 piece for me (one of these days…).

So, noticing the lack of Bibles in the room, I humbly and helpfully chimed in, “I can quote it, but you’ll have to forgive that I’ve memorized it in King James.”

(In hind sight, I kinda wonder now if they expect that I wake up every morning praying three hour prayers, staunchly reading only the King James Version of the Bible and sticking thorns in my side for the sheer pleasure of it…  But I digress.)

So I quoted it to a quiet, perhaps taken aback, group of strangers who might not have expected, “Confess your faults one to another and pray one for another that ye may be healed.  The effectual fervent prayer of a righteous man availeth much,” to have come from my perfectly lip-glossed mouth.

Then I just shrugged and feigned righteous arrogance, “Yeah.  I’ve got the whole Bible memorized.”

“Oh,” I realized out loud, “You don’t know me yet,” as my joking around fell upon the ears of not a single Square Piece reader.  What did I expect?!  He he he!  They’ll figure me out soon enough.

Heavens no.  This – this! – is what I’ve listened to about 50 times straight in the last week.  (Benny-boo has a thing or two to learn about he and I taking turns on the playlist!)  Seriously, the longer you listen to it, the funnier it gets.  The babe has excellent taste.  And that last note with the fireworks?  That’s exactly when he asks for a repeat.  It’s unbelievable.

But for all his sophistication, he still loved playing in the fire pit this morning. 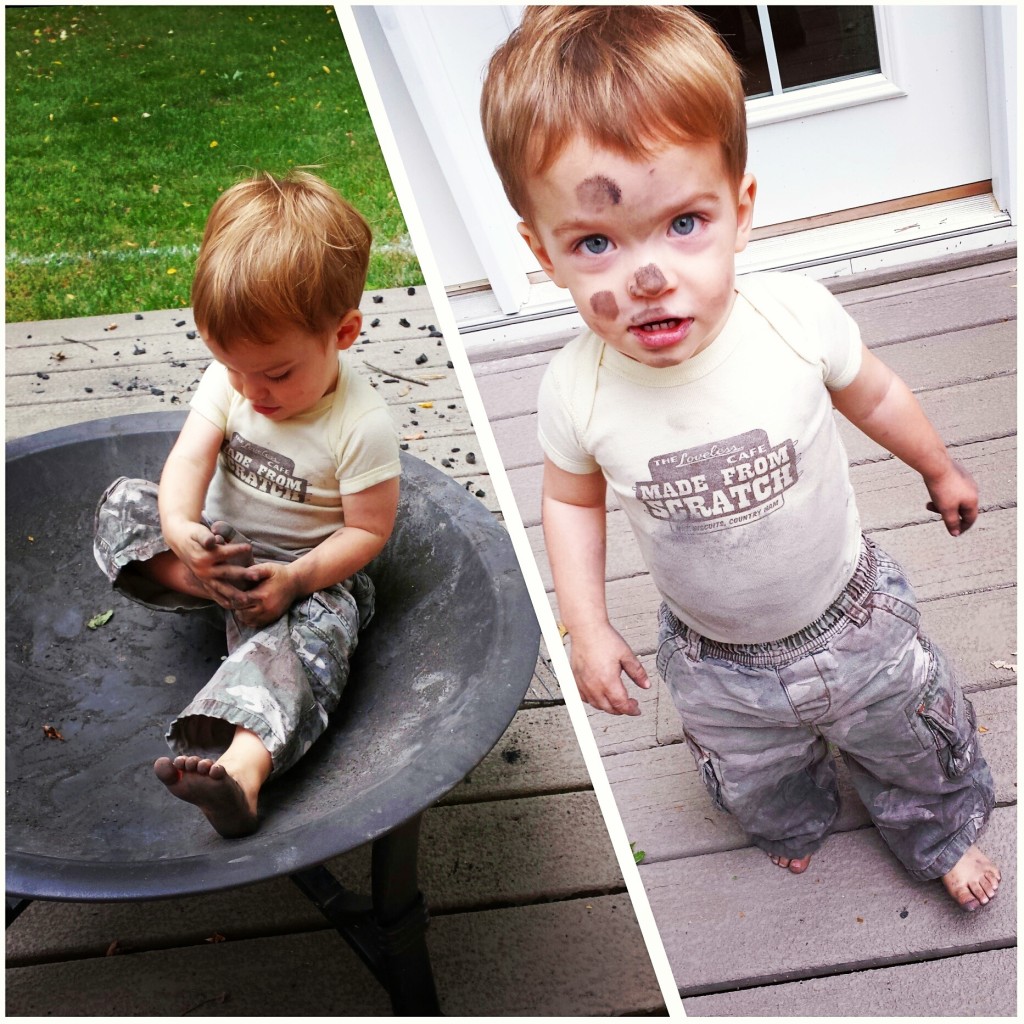