If I were the Hulk, there’d be one surefire way to make me go green: mosquitoes.  Once bitten by a mosquito, I lose my sense of humor in five seconds flat.  The rest of the day is deemed ruined as I scratch myself raw, whining to Brian about the large welts that begin to appear.  (I’m pretty sure my skin is slightly more sensitive to them as I don’t normally see other people’s mosquito bites cause these reactions.)

So I sent myself to bed slightly earlier than usual.  I don’t like staying awake when I’m so crabby.

Several hours later, I KNOW I felt a bug on my arm and frantically swatted myself to get it.  Unfortunately in the execution of my bug rage, I ended up nailing Brian in the jaw (or chin?) with my elbow.  Brian swears that he’s been in fights and not been hit that hard.  Whoopsie.

All the excitement woke Bennett up.

Upon lying awake I noticed some uncomfortable sensations in my legs.  Perhaps this was restless leg syndrome?  Seemed hard to ignore.  Being that Brian was still wide awake from his wallop, I asked if he’d please “squeeze and release” my leg muscles.  A lot of times this works better than massaging.  Unfortunately, I didn’t notice my husband flip positions (probably was distracted by Esther’s adorable, stretched out belly) and accidentally flailed my legs a bit, kicking Brian in the face.

Now, an hour and a half later, I’ve caught up on everyone’s business via Facebook, eaten approximately eight Famous Amos cookies, downed a mason jar of ice water, fed the dog, checked out another blog and pinned an incredible idea off of Pinterest.

Lookie!  Isn’t it neat?  Take a VHS box and make it a picture frame/wall storage! 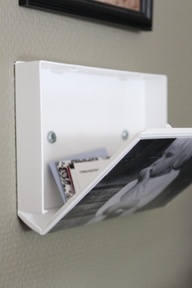 Credit belongs to this site, but there’s not a lick of English on it.