This week’s question comes from Courtney.   She wanted to know if I would be willing to share about adopting our youngest daughter.

I’m always delighted to share about our adoption of Olivia.  Especially if it will encourage others to look into adopting and/or fostering children.

One evening I was watching a 60 minute type news show about adoption.  Due to my age and the difficulties I had with carrying Donovan I knew that I would be physically unable to bear anymore children, but I definitely wanted to have more.  Up until that point, I never really thought about adoption.  This was around the time that Donovan was three years old.  Digging deeper into the process of domestic adoption and being open to adopting an older child, we elected to go through a local foster care agency and see what developed.

The initial training to become a foster parent was very helpful.  It was important for us to know and understand what the children go through when they are removed from the home and placed into foster care.  We started with respite cases, where we would look after the children of other foster parents who either needed a break, or were going out of town and could not take the child with them.  Our first foster child was a ten year old girl.  Then we had a 17 year old and her one year old baby girl.  Then we got a boy that was about three years older than Donovan.  He wasn’t available for adoption, but by then we had figured out that Donovan should be the older child.  After a month or so of this young man, we did another respite case.  This time we had a teenage girl, who figured out real fast that she should have gone to Florida with her foster family, cause she wasn’t getting to hang out with her boyfriend like she thought she would when she chose to stay home.  Then we got a little boy that was younger than Donovan and available for adoption.  We had this little guy for almost three months, and unfortunately he had some special needs that I simply was not able to address.  He was the child that made me face the fact that I could not take care of every one, no matter how much I wanted to do so.  His story had a happy ending though, cause he was reunited with his sister and they were both adopted by a couple who had no children.

After this little guy, we took a break and offered up some extra prayers on whether or not we should continue to foster and did we really want to adopt another child after all ….  Then we got the call about a little girl who was available for adoption. She had a brother, but they could not be placed together and yet they wanted them to be able to stay in touch.  At this point, Donovan was finishing up first grade and this young lady was almost done with kindergarten.  The ages were perfect, and whereas we had originally thought he should have a brother we were beginning to see that a girl might work out better.  We decided to meet the foster parents who had cared for these siblings and see how things transpired.  We met at McDonald’s and while we watched the children playing together we talked with her foster mom about her challenges.  Charley and I looked at each other and we just knew that she was the one, even when she threw herself on the floor in a tantrum because her foster mom would not get her any ice cream.

We got Olivia in May of that year, so she had to transfer schools, but she made friends fast, especially with her new brother.  Eventually these two became like two peas in a pod.  In fact, it was hard to imagine a time before we got Olivia, she just fit into our family dynamics perfectly.  The adoption was finalized the following April.  The policy of this particular agency is that you take a year off as the child is settling in before resuming any further foster care.  We chose not to get involved in that for a bit longer and then we joined our local DSS as foster parents when the kids were in middle school.  Olivia was our 7th foster child … altogether we have had 24 foster children in our care.  We are still in touch with her brother’s new family.

The following picture is the very first day she joined our family and the next one was taken this year. 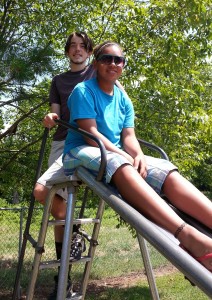 Thank you for your question, I’ve enjoyed going down this memory lane.