Suzanna posed the following question to her readers recently, “Momma only has two more blog posts before the year is up. Does anyone have a subject on which they’d like to see her speak?”  Sherri B. responded with, “Uh, Sheep?”

I’m guessing that Sherri may have glimpsed a few things that gave away my affection for all things sheepish.  Most of my profile and timeline cover photos on Facebook have something to do with sheep.  My personal blog and the one tattoo on my arm even make reference to the One who is my Shepherd.  I have over 70 items scattered throughout the house (yes, we counted) that resemble sheep in some fashion or another.  There’s the nativity set that stays up all year round which has more than the average amount of sheep in various positions that usually grace a creche.  The floor, bookshelves, walls and refrigerator all share space with everything from the cute, fluffy stuffed animals to the artistic variety made of Papier Mâché, or clay, or straw, or wood, or tin, or ceramic … I think you get the picture.  Would you believe that when we moved from West Virginia to Virginia I actually reduced my collection by two-thirds and sent that to a fellow sheep collector who was a real shepherdess?  How my collection rebuilt itself to even more than I previously owned escapes me ….

So … why sheep?  What’s the attraction to these dumb creatures?  I say that in the kindest way possible, because sheep truly are not gifted in the I.Q. department.  Sheep require the conscientious care of a shepherd in order to survive.  They will easily go the wrong way and walk straight into dangerous territory if they don’t have someone to guide them. 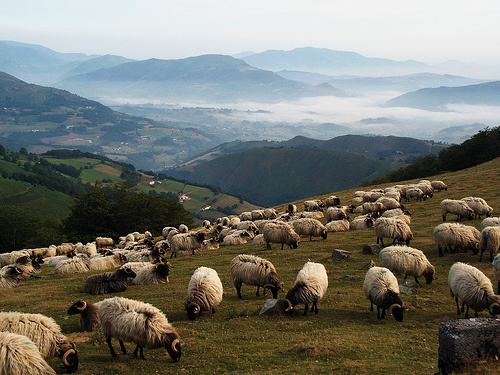 Maybe you already knew this about sheep, but I did not know anything at all about them, even when I was first drawn to the whole symbolic imagery of the Lord being my Shepherd, I was clueless to the nature of these helpless creatures.  It was during the first few months that I found myself a single mom with three young children that I would read the scriptures daily, sometimes for hours, looking for strength and reassurance.  One day I reached the 23rd chapter in the book of Psalms, which was a familiar passage, but for some reason it really jumped out at me and the first verse, “The Lord is my Shepherd, I shall not want,” became a sort of watchword for me.

As time went by I realized why I was so attracted to this symbolic imagery of having a Shepherd and being one of His sheep.  Sometimes, often through no fault of my own, I found myself getting into situations where I needed to be rescued.  In the book of Matthew it says, “When He saw the crowds, He felt compassion for them, because they were weary and worn out, like sheep without a shepherd.”  As a single Mom, I was often worn out and weary, but my Shepherd always managed to lead me beside quiet waters to restore my soul.  There are many, many more passages of scripture throughout the Bible that mention sheep and give me comfort, I’ll just list a few of them and then leave you with an image that gives the strongest impression of what this sheep personally thinks of her Shepherd.

As a shepherd looks for his sheep on the day he is among his scattered flock, so I will look for My flock. I will rescue them from all the places where they have been scattered on a cloudy and dark day. ~Ezekiel 34:12~

Now may the God of peace, who brought up from the dead our Lord Jesus—the great Shepherd of the sheep—with the blood of the everlasting covenant, equip you with all that is good to do His will, working in us what is pleasing in His sight, through Jesus Christ. Glory belongs to Him forever and ever. Amen. ~Hebrews 13:20-21~ 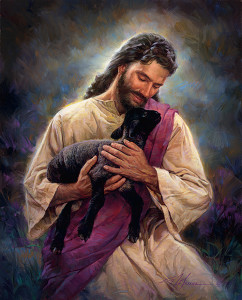