My cat, Emma, is slightly deranged.  She likes to lick plastic bags in her spare time.  It’s not uncommon to be going about my business and from somewhere else in the house I can hear *crinkle*crinkle*crinkle*crinkle* as she’s found another grocery bag to enjoy like a lollipop.

But yesterday morning was different.  I heard a noise that would have seemed like it was coming from Emma, except that I knew where Emma was.  She was snoozing in the guest bedroom and this noise was closer to me in the kitchen.

I opened the pantry door and discovered that my pita chip bag “was alive.”  It just kept moving and rustling and moving and rustling.  Being a brave soul and knowing that this had to be a mouse, I did the only thing that I was capable of in that moment: I stood frozen in silence, eyes wide, breath held, watching the bag.

But then I saw the little sucker scurry out, at which point I mustered the nerve to yell, “BRIIIIIIIIIAAAAAAAANNNNN!”

Brian, from his morning slumber, “What?”

Me, hollering from the kitchen, “There’s a mouse!  He was in the pita chip bag!”

Okay.  I might not have jumped up on a chair and squealed like a girl, but there wasn’t any way that I was picking up that bag not knowing in which direction little Mousey was likely to dart.

By the time Brian made it to the kitchen, Mousey hustled around the pantry shelf so that Brian could see him, too.

I never took my eyes off of his hiding spot as Brian casually went to the cabinet to find something in which he could trap the sucker (much like you’d put a cup over a spider).  Alas, this mouse knows magic tricks because when we removed the wall of goods behind which he was hiding, Mousey had vanished into thin air.

Oh, how I wish this was about Emma and her plastic grocery bag addiction!  (Or about either of my two cats and their ability to hunt!)

PS: Brian and I have lived here for seven years and I had no idea that this was lining my pantry!  (Naturally I discovered this as I obsessively removed everything to clear it out.)  Look familiar?  I swear my grandma has magnets with that pattern. 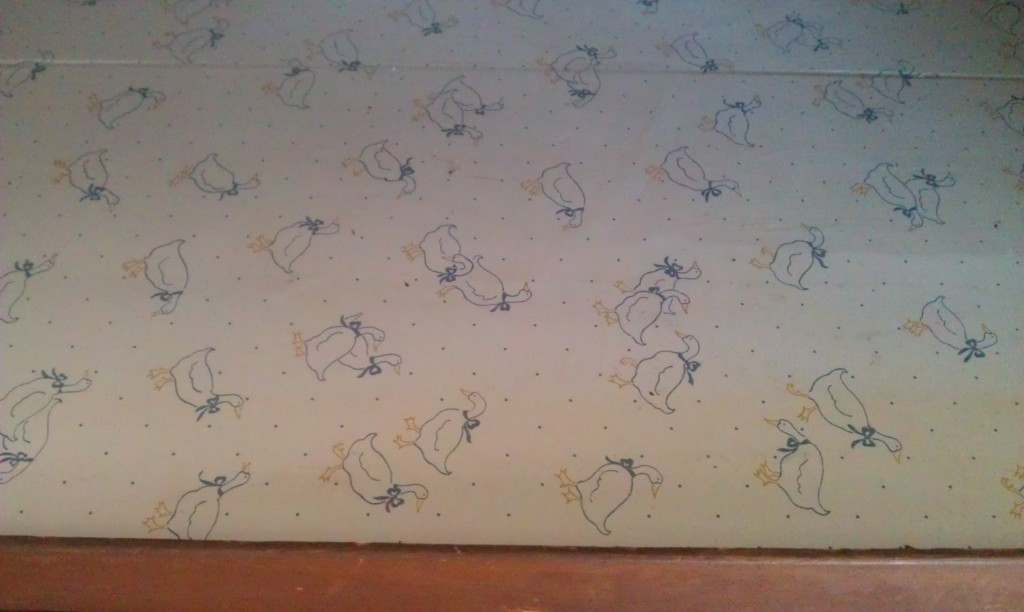