I need to get this tattooed.

No.  I want to look like I’m being knit together.

Now, I’ve never seen it done.  But the way I saw it, if I could come up with the idea, Jason could make it happen.

Jason has been Brian’s main tattoo artist since my hubby was in his teens.  Brian’s covered on both arms, both legs and across his stomach.  I see Jason’s work daily.  But beyond that, Jason’s got a lot of street cred.  He’s won a bazillion tattoo competitions.  He’s an artist.  And Jason’s reputation precedes him.  He’s like a little celebrity in the tattoo world.

He is not, however, a knitter.

Before springing this idea on Jason, I decided to do my homework and make this concept as understandable as possible.  I poured over tattoo magazines and indicated the do’s and the don’ts.  Do use texture like this.  Don’t make it look like a coloring book.  Do use this shade of blue.  Don’t use that shade of blue.  Etc.

I also referred to my Knitting For Dummies book in at attempt to find an enlarged and exaggerated version of the two traditional stitches, knit and purl, that I wanted in my design.  I found them both, but unfortunately not in the same picture.  Do you know what that meant?  That meant that I was asking my tattoo artist – who has never knit a day in his life – to figure out how to draw both stitches into one design with a precise understanding of how the thread would realistically intertwine in real life.

Okay, so I drove 45 minutes to Berryville, Virginia.  There are dozens of tattoo parlors that would have been closer, but I had to have the best.  I walked up to the receptionist and explained my intentions.  She looked at me like, Huh?  You want to look like you’re being knit together..?..

With a face that said, Now I’ve heard it all, she slipped away to privately speak with Jason.

Later on in our relationship, Jason admitted that he thought he was being Punk’d.  He fully expected camera crews to run around the corner, pop out from behind bushes and say, “Gotcha!”

But the camera crews never came.  It was just Square Piece standing there, serious as a heart attack, asking for the impossible like she was asking for a slice of cake.

Considering the hours of prep and drawing that this tattoo would require, Jason informed me that there’d be NO way this tattoo would be done today.  In the meantime, we consulted at length and that day I opted for a much simpler tattoo of a handprint that I had been wanting for years.  (Loooooong story.) 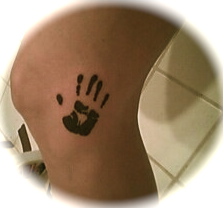 Tattoo by Jason #1) A handprint on my knee that took 40 minutes.

Future tattoo by Jason #2) A portion of my back being knit together that took 19 hours.

Guess which one made me pass out?  Yeah.  The little one.  Poor Jason had to fan me and bring me water until my consciousness fully regained.  Imagine what he must have been thinking that day:

Dude.  This chick wants a knitting piece that’s going to take days and she’s already passed out 5 minutes into this tattoo.  How, exactly, is this going to work?

(And happy birthday to my big sis, Manny!)