If you’re not tired of reading about this knitting tattoo, then I’ve got just a tad bit more info left to wrap this baby up.

Let’s be real.  My tattoo is aMaZiNg.  AMAAAAZING.

And if I didn’t believe it myself, I’ve gotten plenty of feedback to reinforce this opinion.  Most of the feedback comes in the form of perfect strangers reaching out and touching my back.  That’s right.  Normally I don’t like people whom I don’t know making physical contact with me; but my tattoo is my one exception.  I understand that they can’t help themselves.  Once they lay eyes on it, they have to feel it and see if the yarn has the texture of a scarf.  Happens all the time.

And if that wasn’t confirmation that Jason did an amazing job making this look realistic, I’ve got another:  I know a woman who owns her own knitting & yarn shop, who personally shears her very own sheep and spins her very own wool into yarn.  (Seriously.)  When she saw my tattoo, she assumed that I had gotten a photocopy of a picture in a knitting book and then placed a sticker of it on my back.  (Though… I’m not sure why anyone would do that.) 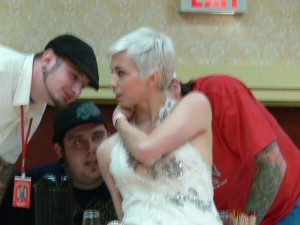 The way that I see it, if I fooled the sheep lady, then this tat rules the world.

Several months after my tattoo had healed, I decided, What better way to show Jason my appreciation than to enter my tattoo into a tattoo competition?  Oh yeah, and I also decided to go platinum blonde. 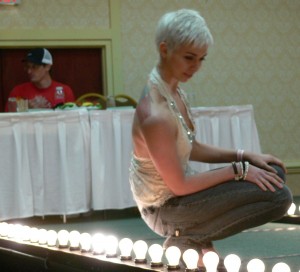 Brian and I drove to Richmond for a tattoo convention and I entered my tattoo twice.  One entry was for Most Realistic Tattoo (ladies and gents, no contest) and the other was for Best Small Color Tattoo (Small?  Not to me, but comparatively, yes.).

The judges had never seen anything like it.  When they asked who my tattoo artist was and I told them, they were like, “OOooooohh, of COURSE.”  (See?  Told ya Jason was known around these parts.) 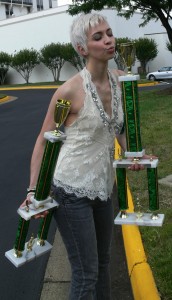 I won first place in Most Realistic Tattoo.

I would have won first place in Best Small Color Tattoo, but they gave me second.  Later, the judges told Jason that he was clearly the winner, but since they had already granted him first for Most Realistic, they wanted to spread the wealth. Lame.  Lame.  Lame.  Jason totally deserved both firsts.

Regardless, I gave him his trophies, rightfully won. 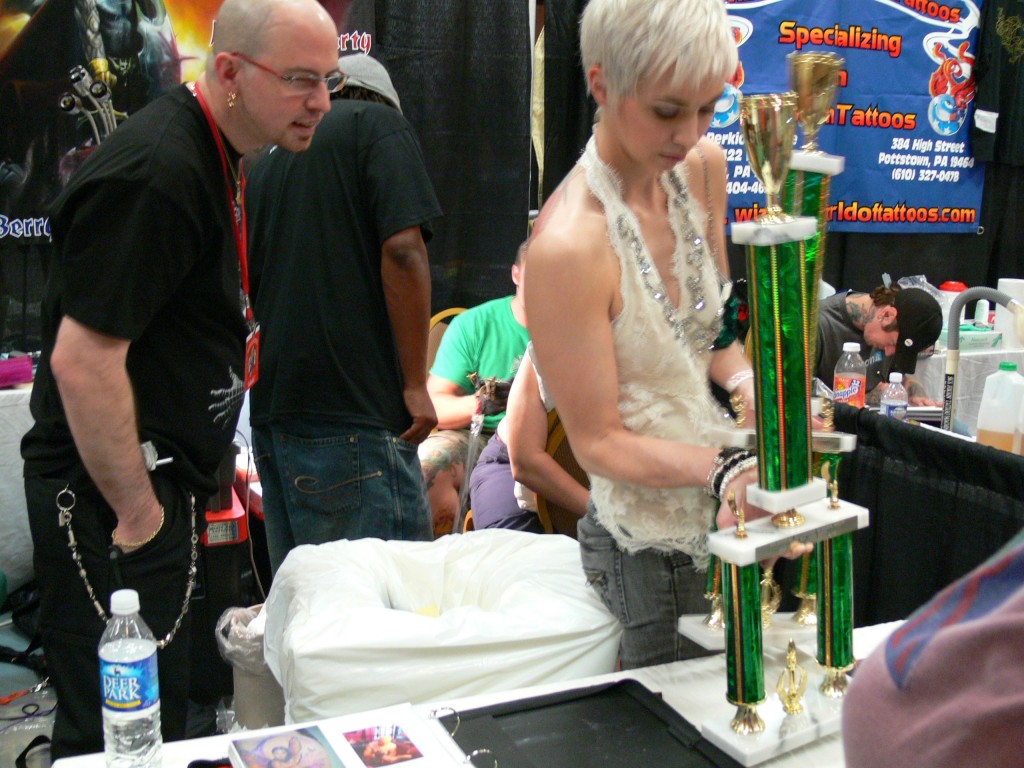 PS: The guy staring at my back is NOT Jason.  Jason’s in the green tee in the background.