Clearly I have a ways to go before I reach the place of humility and maturity in which Charley had been camped for years.

He?  He wants us to celebrate colorfully.  If it were me?  Well, I’d want you all to cry like babies, mourning in sackcloth and ashes, desperately missing your Square Piece.  Inconsolable.

I’m not there yet, Charley.

I saw things that I didn’t want to see.  It’s hard to celebrate when there’s that imagery seared in the recesses of your brain.  But for every difficult memory, there’s an equal and opposite moment that more than soothes the bitter sorrow and ushers in a sweeter sorrow.

There at the end, Charley had a hard time drinking water and swallowing.  That said, every time he took a sip, it was from a silly mustache mug… You know, the kind that makes you look like you have a mustache when you put it up to your lips.

When he was quiet, you could hear the sound of his saliva rattling because it was pooled in his throat, crackling with every exhale.  But when he was quiet, he was able to hear the gentle music of my sister, Mandy, strumming worship songs and hymns for him on her guitar during his last hours.  Sometimes we sang along.  Sometimes we didn’t.  Charley loved it and encouraged her to continue.

Every now and then he’d drift off.  When he came to, sometimes he looked a little confused, his bleary eyes searching around the room (seeing things… seeing balloons, aluminum pipes, broken scissors, earthly or heavenly beings…).  Then he’d lock eyes with Momma and she’s smile and nod her head, causing his eyes to shift into a calm understanding as he also smiled and nodded his head.  Whenever his eyes landed on mine, I’d smile encouragement to him while holding up the “I love you” sign in sign language.  He always reciprocated in like manner.  Even when he slipped into a more semi-conscious state, every now and again his right hand would raise and his fingers would lift and separate, clearly meant to be the “I love you” sign, but lacking the strength and awareness to firmly set it. 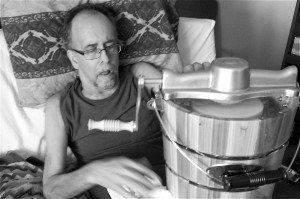 For a time, I was sitting beside his bed, gently rubbing Charley’s lower leg in that comforting, lazy, back-and-forth manner.  He had lost so much weight that I could feel the sharpness of the bone beneath his thin lounge pants.  Just that morning he had enjoyed my scrambled eggs and later that afternoon had wanted a second helping of the ice cream we had all churned together on Saturday.

Not really sure what else to say for now.

I hear his voice in my head.

I feel how cold his hands got.

I see the body bag being zipped over his face.

Yet the hardest part isn’t so much carrying those bits and pieces around, but knowing that my family is doing the same thing.  My sister can still hear his voice in her head, my mom remembers how cold his hands got and my brother can still picture his father’s face disappearing beneath the zipped bag.

I ache more for my family than I do for myself right now.

But I’m so happy for Charley.  I’m so happy that he’s not in a body that knows hearing loss or lack of mobility, pain or confusion.