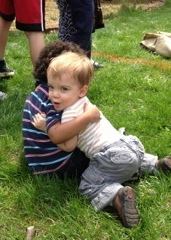 Yesterday, our development held a little Easter egg hunt for the kiddos.  I do believe that Bennett might have been the youngest participant.  He made fast friends with another little toddler.  Over and over, my son just had to hug and snuggle this adorable boy. 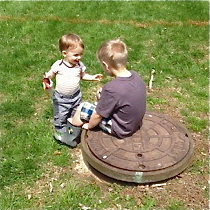 And when Bennett was given some snacks, he was more interested in sharing the chips than eating them.  Such a friendly fellow!

(This babe was incredibly interested in what was making all that noise inside the eggs.) 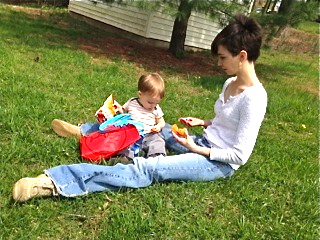 This morning, Brian and I had a quiet, private Easter celebration with Bennett.  There was reading, explaining, and exploring the contents of the Easter bucket.  A couple of months ago, I spotted these Melissa and Doug condiment toys at Three Lil Monkeys.  Bennett loves lids of all kinds (and these are magnetic), so I knew that this set would be a hit.  …And it was.  Especially the catsup bottle.  (The Sperry Topsider shoes also came from Three Lil Monkeys.  He’s been complimented a million times over them.  People spot them a mile away!) 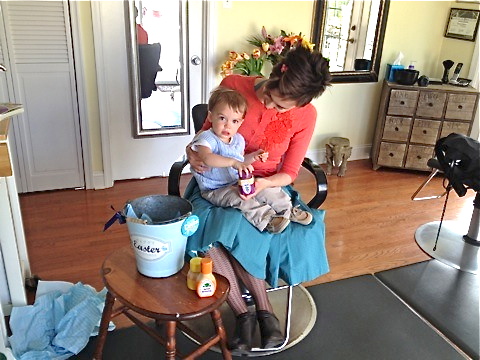 After church and once Bennett was settled in for his nap, I got my VERY FIRST TURKEY EVER into the oven.  One of my clients gave me a killer recipe.  The night before, I had butterflied the turkey and rubbed a butter/herb mixture under the skin, all over the meat.  You. guys.  You guys!  Wow.  It was SO juicy that I began to doubt why turkey has ever been cooked any other way.  I mean, the white meat was was practically dripping it was so moist.  My tongue is so used to turkey being dry, that it was almost unsettling to eat it like this.  Not only that, but because it was butterflied (picture me, a butcher knife and what can only be described as a crime scene over the kitchen counter last night), it was thoroughly cooked through in an hour and a half!

(Easter really is full of miracles.) 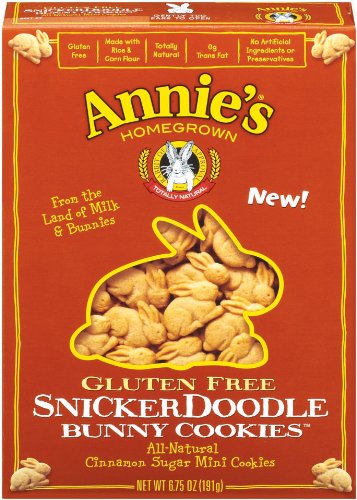 My mother-in-law and family came over a touch later.  Bennett stole the show with adorable enthusiasm, opening each Easter egg, one at a time, savoring the treats inside.  (His face contorts in disgust when he tries chocolate.  Instead of typical Easter candy, I put one of <<these<< in each egg.  MAJOR win.)  In all my life, I’ve never so enjoyed an egg hunt.  First of all, when I was a child, everyone was faster than I was at spotting those eggs.  For every three that a friend or cousin might have had, I would have been lucky to have one. 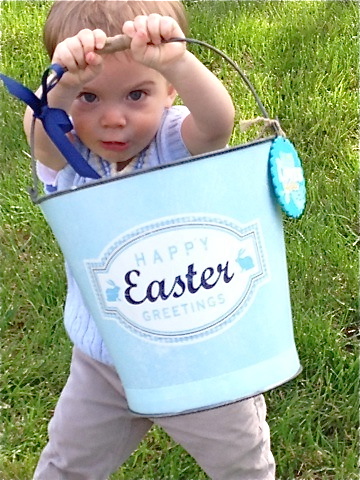 And while I’ve never had a true opportunity to redeem myself and my pathetic egg hunting abilities, it was nice to be able to point a couple out to my thrilled son.

(But seriously, if someone ever wants to throw an adult, egg hunting party in, say, July sometime around my birthday… you know… I’m game.  The Little Girl Square Piece in me still needs closure.)

Before long, between the sugar high and the Grandma’s Easter basket loot and a wild expenditure of energy (yes, that is a potty seat on his head), Bennett succumbed to an early bedtime. 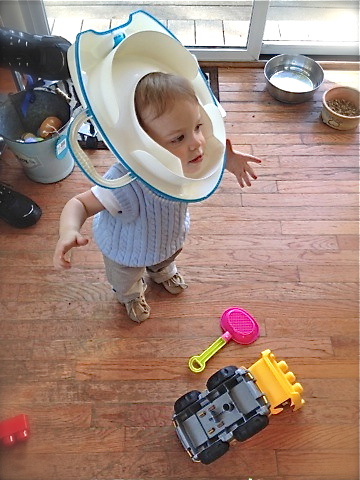 And while I’d love to type away for another thirty minutes, describing the success and efforts of our little kitchen salon, I believe that I, too, need an early bedtime tonight!