There is no sacred space left in my home.  Gone are the days where the bathroom is equated with privacy.

Yesterday, I had Shepherd join me in the bathroom just so I could keep an eye on him.  Yes, I could have put him in the play cage, but he presently equates that to prison, loudly wailing toddler noises that probably have something to do with me being unjust.  Brian was sleeping, so… no, not the best time for loud laments.  Shepherd messing around with drawers and step stools while I used the bathroom wasn’t such a big deal.  The moment when I felt the sanctity of The Poo being crushed was when Bennett, completely oblivious to the fact that I was occupied, sauntered in to ask if I could lengthen his roller skates.  Never mind that he purchased these two years ago and has shown interest in them twice.  Now – right now – they needed to be lengthened.  Certainly on some level he was okay with waiting to go outside until I had wrapped up and could join him, so I fail to see how this was so pressing.  But while I sat there, he handed me his roller skates quite innocently, like we could have been having this conversation in the kitchen. 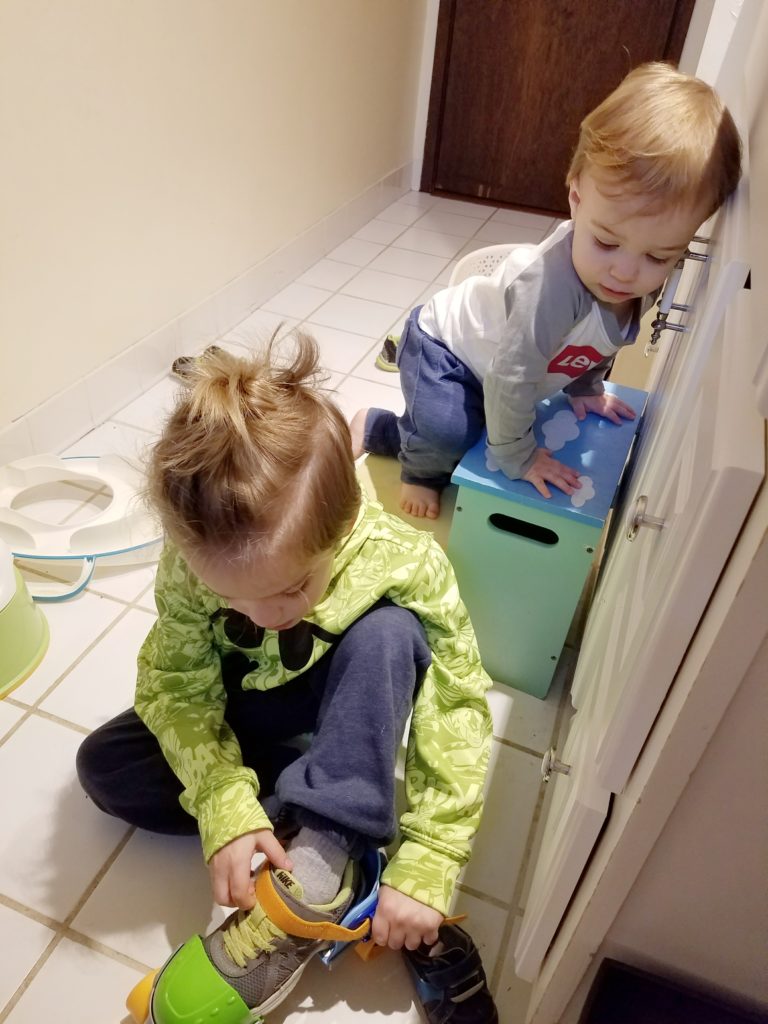 So, yes, I lengthened his roller skates.

For a bit, I heard him skate around the house and then… silence.  Never good.

Back he came with a new prize, a woodsy-looking Santa statue that I had picked up from Cracker Barrel for a White Elephant exchange.  I know for a fact that I left it in its box in our foyer.  Did Bennett bring the Santa in the box?  No.  Bennett pulled it out, leaving scattered styrofoam in his trail back to me.  This time he didn’t enter the bathroom.  He simply widely opened the door to show me the Santa from the hallway while I sat on the pot.  He wanted to know if I was proud of him for getting it out.  And in the two seconds that it took me to contemplate how to answer that, I watched Shepherd head out the door to the hallway, pick up the statue, and slam it repeatedly on the floor, smashing Santa’s head to bits.

At this point, I’m scrambling with my britches to get to my children because either Bennett is going to roller skate over the broken bits and further pulverize them or Shepherd is going to try and figure out if he can eat the shards.

Ironically, this did in fact wake up Brian, so I probably should have just put Shepherd in the play cage.

Now with Brian up and having my back, I knew that I could finally poo in peace.  Or so I thought.

Sure enough, slick as a whistle, Shepherd snuck out of Brian’s sight, found me in a different bathroom, and proceeded to slam my back with the toilet lid behind me, repeatedly. Of course, that was only when he was taking a break from knocking everything off the tub ledge and into the tub.

This episode took place literally minutes before I rallied to take my children to Wolf Trap’s Holiday Sing-Along.  I’ve been wanting to attend this for years, but there’s always been something getting in the way.  Yesterday’s potential “something” was waking up with a tickle in my throat, the kind of tickle that makes me think I’ll lose my voice if I’m not careful.  Did that stop me from making every effort?  Heavens no.  After taking 13 supplements, drinking straight apple cider vinegar, sucking on about 7 essential oil throat drops, downing a quart and a half of a mixture containing about 3 teaspoons of ascorbic acid and even more raw honey, and getting a chiropractic adjustment, we got our holly jolly butts to the sing-along!  Given the delicate state of my throat, I could only participate so much, but the boys barely noticed.  So long as I was pointing to the lyrics in the program, Bennett was content to sip his homemade hot chocolate and Shepherd was pleased to jingle his tambourine. 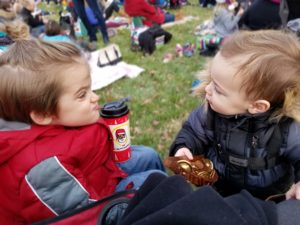 Sometimes it feels like I live in a mad house.  But I love these boys.  I really do.