Last month Brian asked me to make him a sandwich that he could take to work for lunch.  Feeling the weight of the holiday season upon me and being quite pressed for time, I whipped one up in a flash.  The only two pieces of bread that we had left were beginning to mold.  Additionally, they were both heels.  I scraped the mold off and hoped he wouldn’t notice.  I knew that combining mustard and mayonnaise would taste the best; but rummaging around for the second condiment would have taken too long.  Instead, I just slathered mayonnaise on both pieces.  I sprinkled some leftover Mexican cheese shreds on one side, then slapped a piece of bologna on top of that.  Instead of taking the time to contain the sandwich in a small ziplock bag, I tossed the whole thing in a brown paper lunch sack.  Then, with red lipstick freshly applied, I kissed the outside of the bag and left an adorable smooch on the package.

When Brian got to work that day, his coworkers admired the thoughtfully packaged, homemade lunch that his wife had made him.

How considerate!  What a lucky guy to have someone care for him!

However when Brian opened the lunch sack, he realized that his sad, little sandwich had come entirely apart and was rattling around on the inside, smearing mayonnaise all over the place.  Even if it was still in tact, it wasn’t the type of sandwich that he would have considered edible anyway, what with the mold, the heels and the skimping of the mustard.

Thanks, Brian thought.  But no thanks.  It would have been kinder of you not to have made me a sandwich at all than to have made one that proved your complete disinterest in me.  Next time just say, “No.”  That way you don’t waste your time and I’m not left feeling like I don’t matter.

But this one did:

This past weekend, Brian looked at me and pleaded, “Will you do one thing for me this weekend?”

Brian, “Will you puh-leeease get some kind of artwork for our bedroom?  Something with color?  It’s so depressing in here.  I don’t care if you buy it or make it.  Just something.  I can’t stand not having any color in here.”

My wheels began to turn.  A few hours later I found myself at the Michael’s craft store, brainstorming up and down each aisle.  My eyes were peeled for the perfect something that would liven up our bedroom.

When I arrived home, I made Brian promise not to look until I was done. 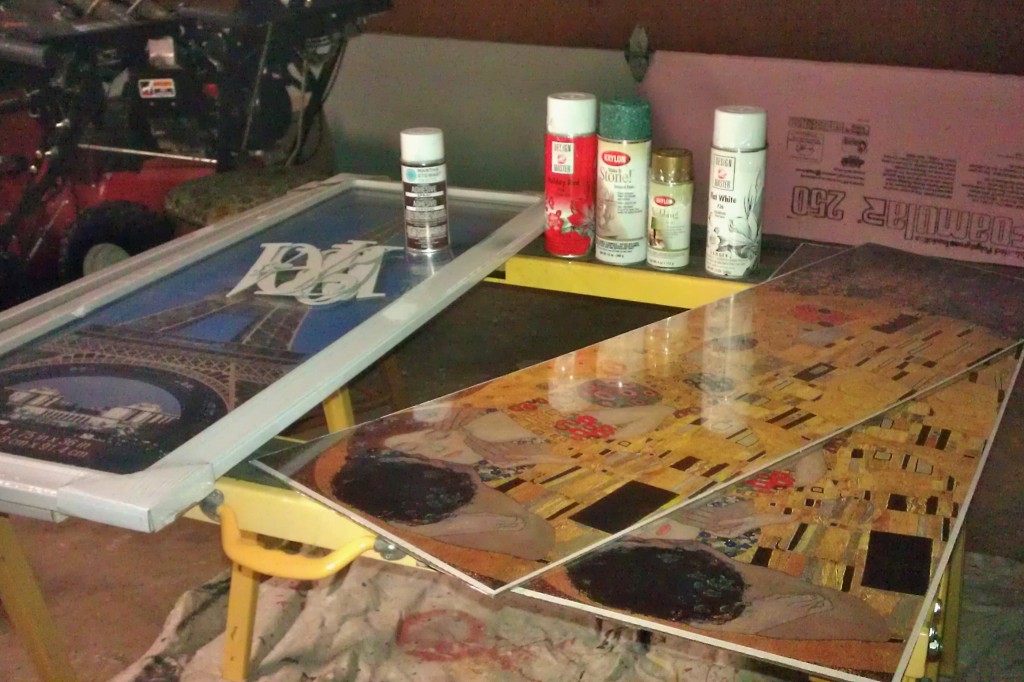 Setting up in the garage, first I sprayed my white frames red and let them dry. 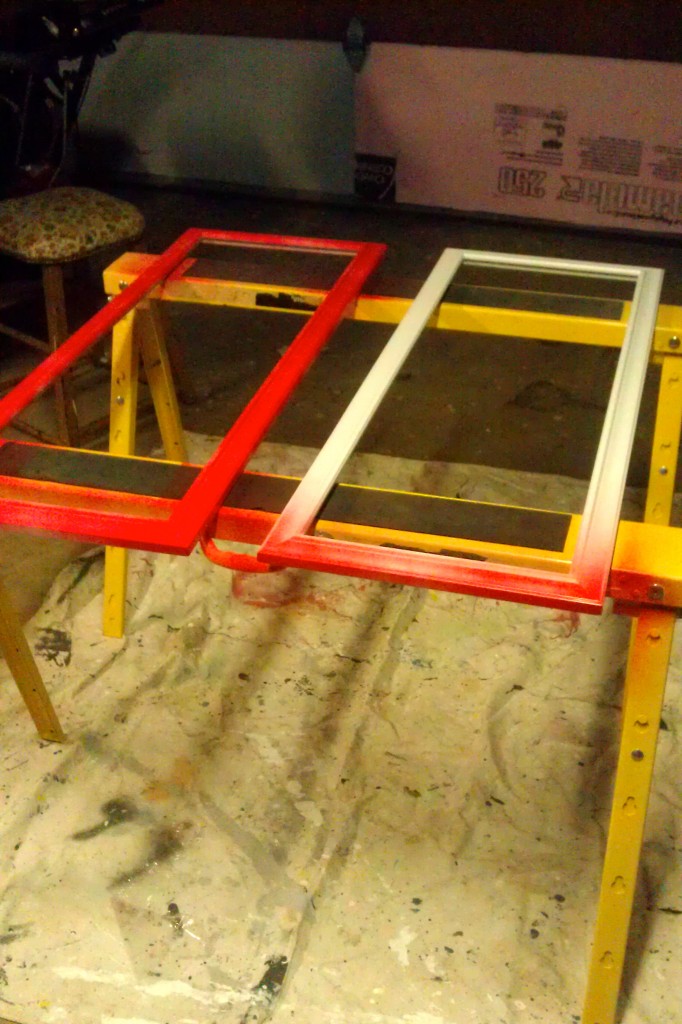 The backside of each letter was sprayed with stencil adhesive (and, yes, I tested all of this first).  After carefully arranging “Very Good.” on my second (intentionally flipped upside down) poster, everything was sprayed with white spray paint and left to dry for a minute.  Then, to add the appropriate amount of texture that would compliment the colors of the poster, I sprayed my bronze marble spray paint right over the white spray paint. 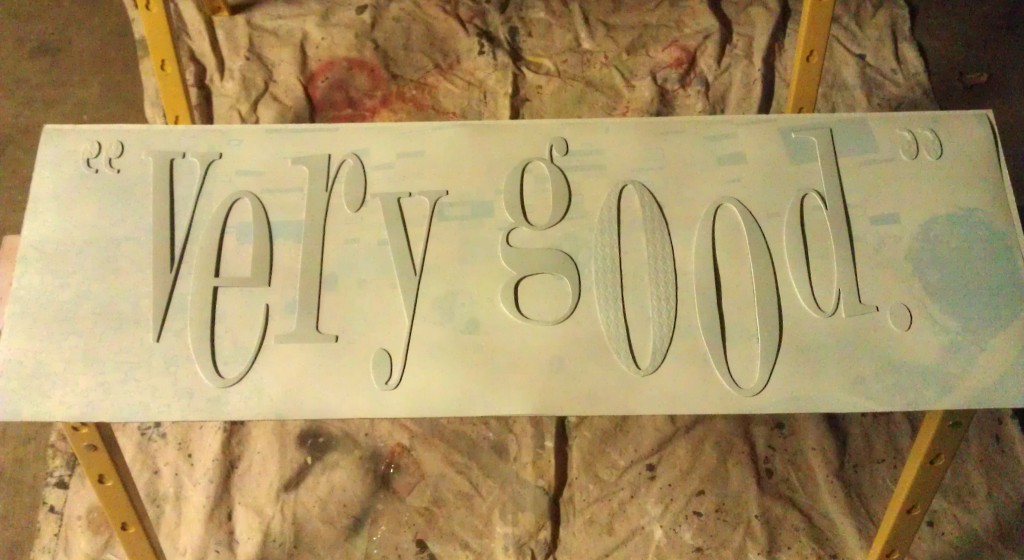 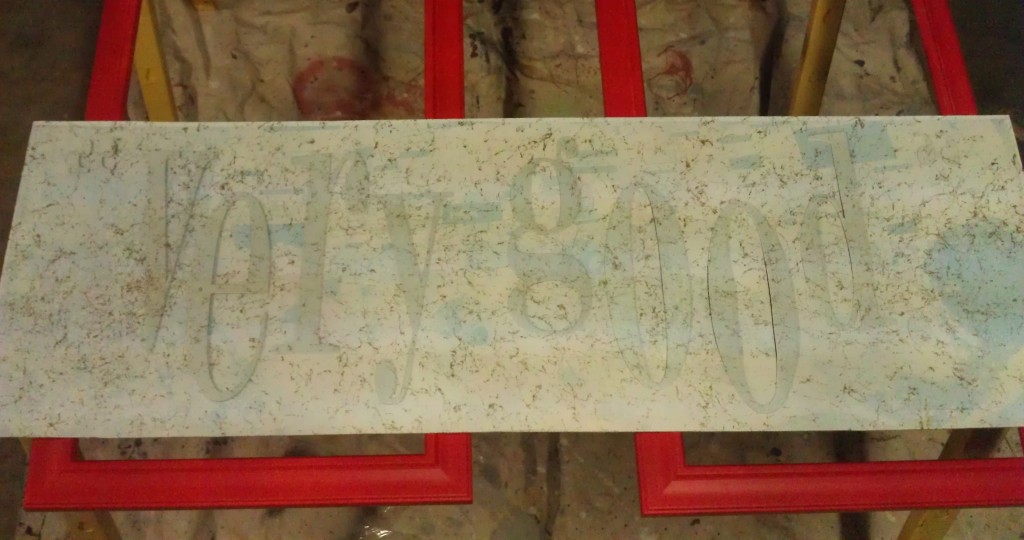 Testing to be sure that my red frames had dried, I went to town spraying them both with blue stone spray paint.  I had to wait 20 minutes between coats.  Even after two coats, I could still see the red peeking through, which is exactly what I wanted. 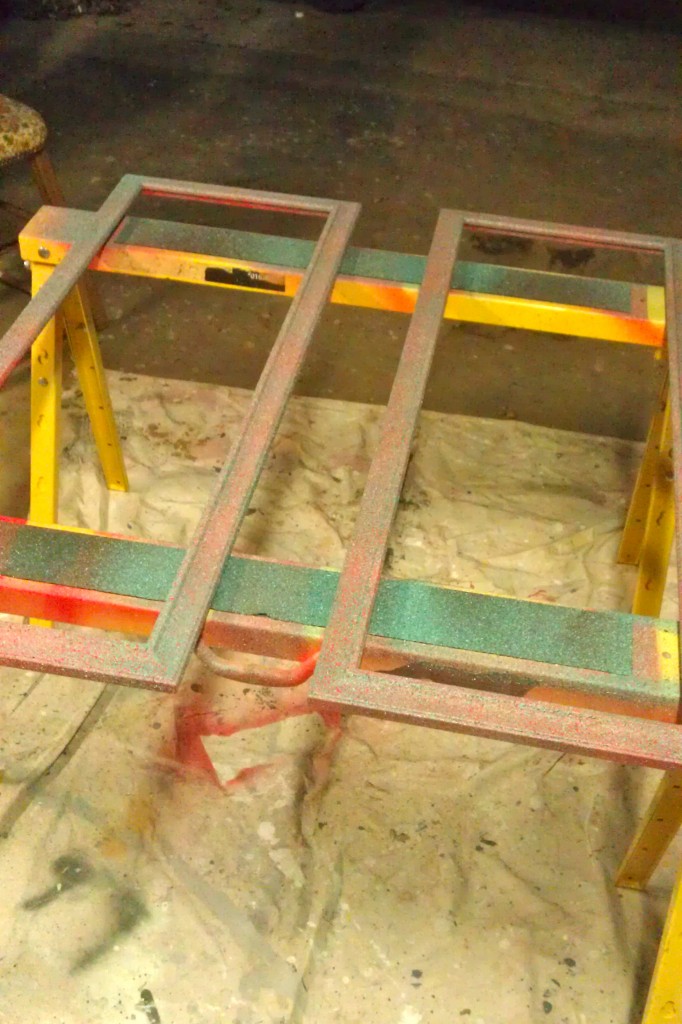 Finally, I peeled each stencil letter off of the second poster.

Both posters were framed.  (And, yes, I fancied-up a tiny sconce as well.)

When Brian saw my Square Piece original masterpieces the next morning, he laughed, clapped, laughed some more, kissed me, looked at them again, thanked me again, and then laughed and clapped some more. 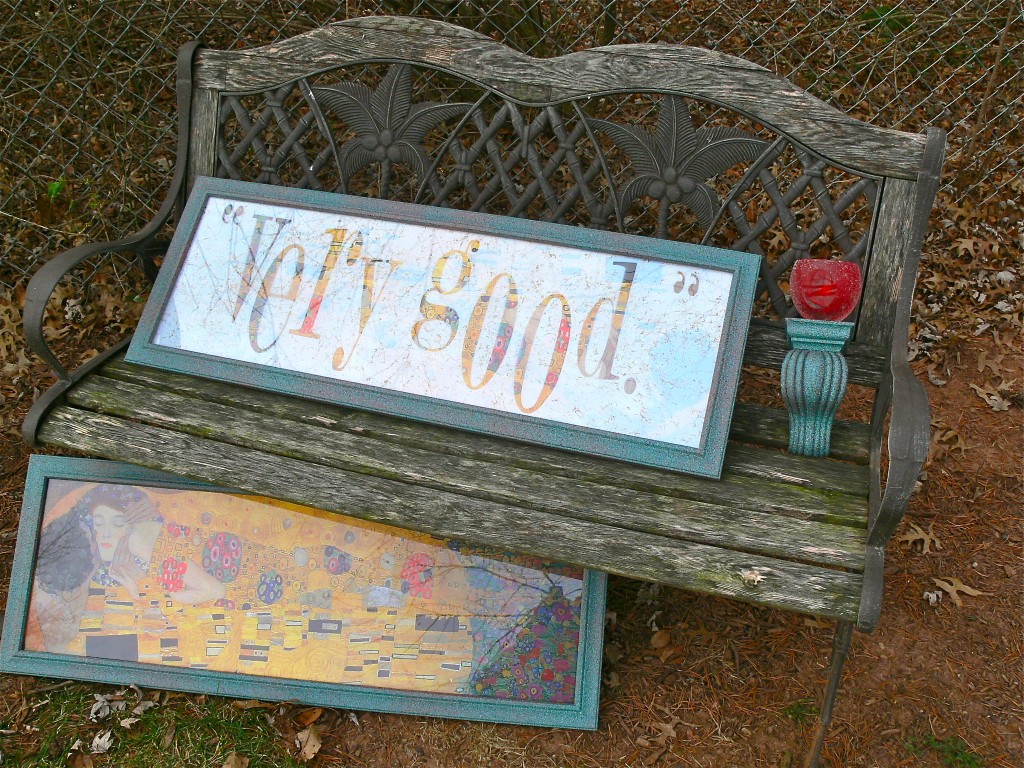 My hubby was so touched that I – instead of running to the nearest home supply store and purchasing a large piece of mass produced art – crafted a couple of pieces that would mean something to both of us.  (Warm fuzzy feelings.)  It IS possible that it might have been less expensive for me to purchase some art on clearance; but the gift from the heart was clearly the better option here.

The reason that I share these two contrasting stories today is to make the point that I recently had a Crappy Bologna Sandwich kind of a day, the kind where the “thoughtful” gesture with the “smooch marks” on the outside actually ended up making me feel more insignificant than touched.  It was the sort of moment that made me think, I really wish you hadn’t.  Because now it’s just obvious how much you don’t care.  And before this, I could have imagined that I meant more to you than that; I could have imagined that you know me better than that.

Have you ever felt that kind of disappointment?

Well, don’t despair.  In a matter of hours, my Crappy Bologna Sandwich moment was redeemed for a Touching Piece of Art moment that taught me a thing or two about disappointment.

And it’s all because of a 40 year old squash blossom necklace.

(PS: The wall art was inspired by a crafty idea from A Beautiful Mess.)