I have a confession.

I’ve been sneaking around.

Remember when I posted about Brian’s birthday and all of his football-related presents?  Yeahhhhh…  There was more to it than that.

Last year Brian attended a men’s church retreat.  Apparently most of those guys participated in one of the best football games of Brian’s life.  Countless men have approached me telling me how surprisingly fearless my husband is on the football field.  Brian himself has not ceased to recount the details of that afternoon.

Deciding that I wanted to make a bigger deal out of the last year in his 20’s than out of the first year in his 30’s, I planned a surprise birthday football game.  Our friend and pastor, Mike, graciously went into cahoots with me (otherwise this event would have turned embarrassingly girly).

So if you think back, that’s why I purchased receiver gloves for myself on Brian’s birthday – to confuse him.  It looked like he could use some more gear for the upcoming game, but I knew that receiving it all at once would spark suspicion.  Instead, I asked his mom to get him cleats for Christmas and then I planted my “the-two-of-us-should-play-in-the-backyard” seed in his head.

(Pfff…  I haven’t even taken the packaging off of my gloves yet.)

Suffice it to say, yesterday Brian was floored.  Not a whiff of party planning had caught up to him.  Twenty men showed up in the freezing (and sometimes flurrying) weather ready to knock each other out on the slushy soccer-turned-football field (with several of us on the sidelines watching, cheering and freezing our butts off).  Enjoy a few pictures from what – according to Brian – was “the best birthday party ever.”

Brian’s in the green jacket.  At this point, it’s all starting to make sense to him.  Before arriving, he was under the impression that I was out doing my sister’s hair and that he’d just be tossing the ball around with two of his friends. 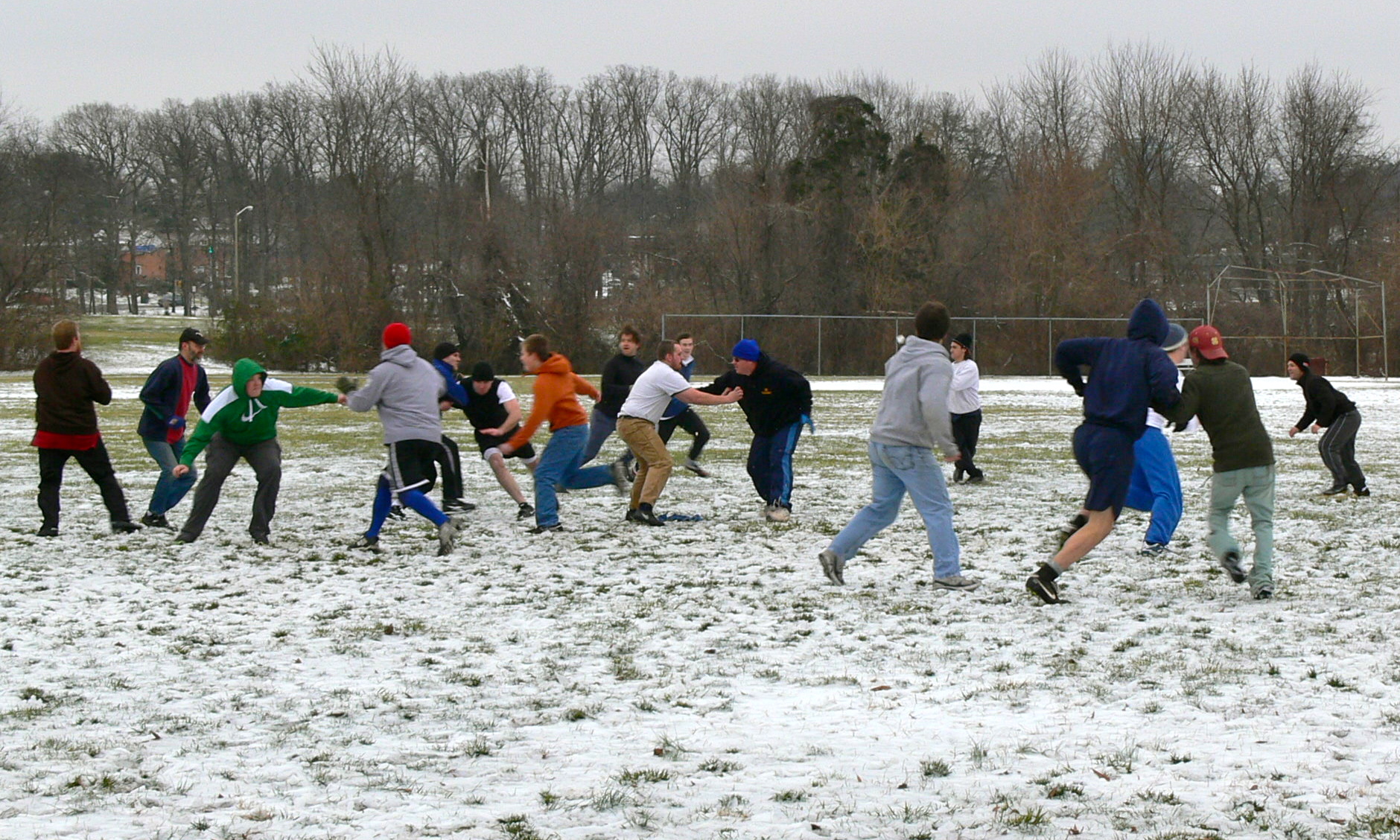 Brave men on the field.  Don’t let the pretty snow fool you.  It was icy, crunchy and sharp (and shredded a couple of bare knees). 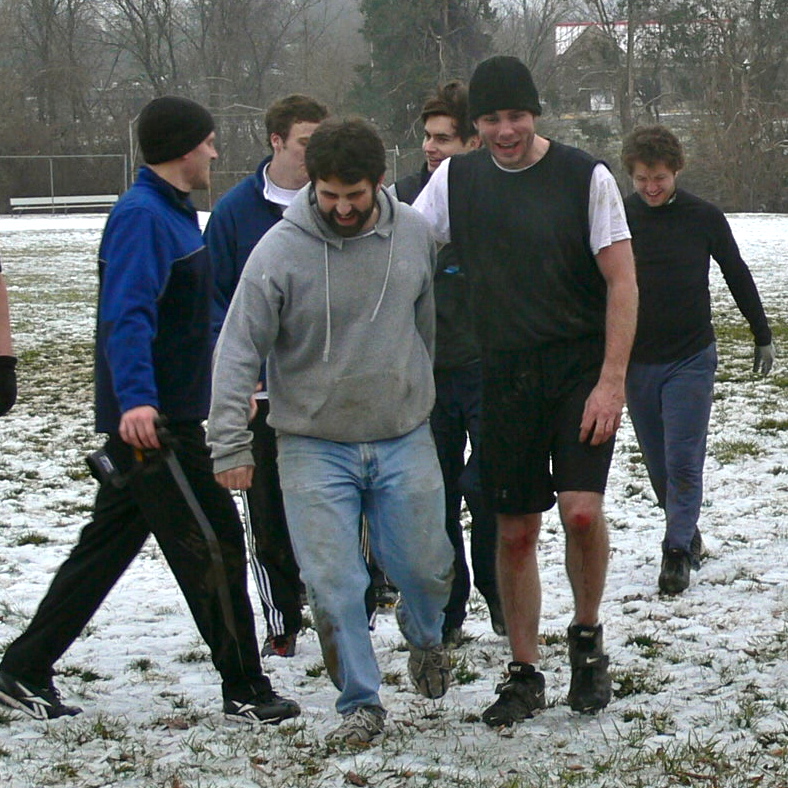 Ahem, like those knees.  Yikes.  It’s so adorable how this kind of stuff plasters smiles on all of their faces.

Some of our gatorade bottles were used to mark the field. 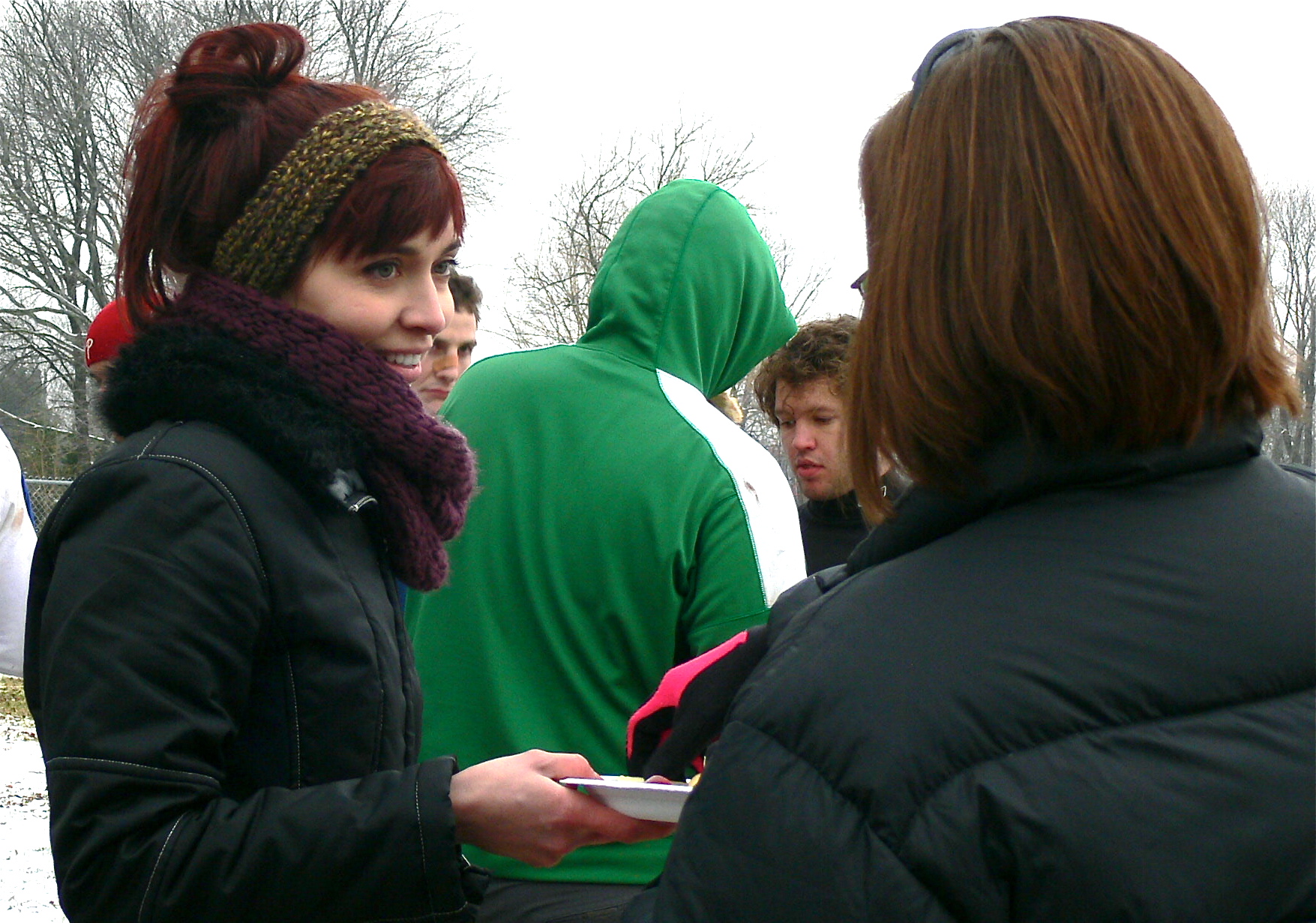 Before, during and after the game I was trying to feed the guys.  Preparing for the cold weather, last week I used some leftover 6-Hour Afghan yarn to knit that headband/ear-warmer. 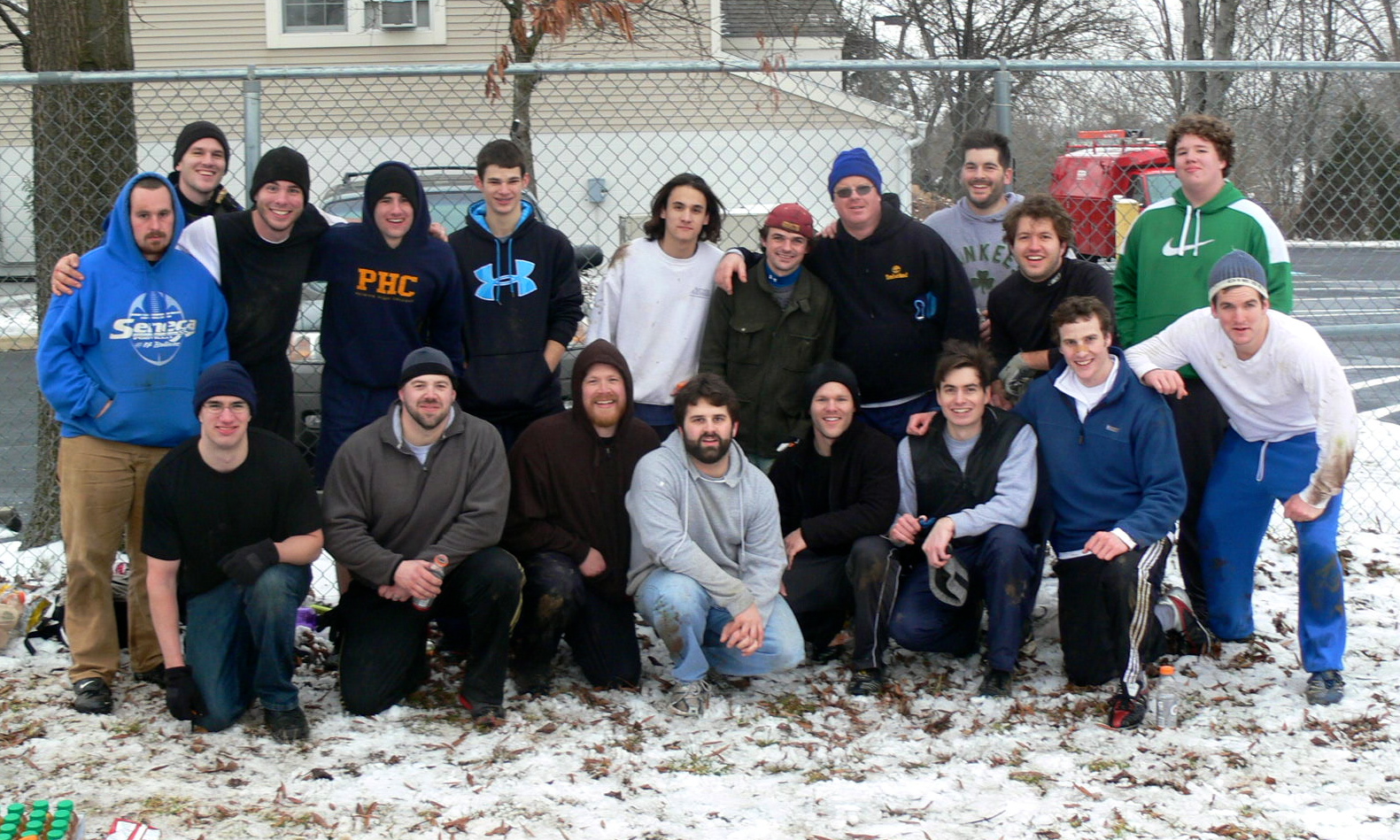 Unfortunately two players had to leave before I took this picture.  What a wonderful crew!

Mike, for helping me pull the wool over Brian’s eyes and sending out the evite.

Jacob, for spreading the word even further.

Mandy, for driving 1.5 hours to help me set up the food table and keeping your car running so that we wouldn’t turn into popsicles.

Rach, for retrieving the balloons and not being thwarted by the fact that Dollar Tree was out of helium.

Bree, for making the most adorable birthday cake.

Sherri, for the lettuce, tomatoes and HAND WARMERS!

Scott, for working over 100 hours last week, but still showing up as one of Brian’s most loyal friends.

Justin, for… how do I put this?… getting Brian to get to the field without blowing the surprise.  (Long story.)

Howard, for “needing” Brian to show up early and help with church set-up.  Otherwise I wouldn’t have had my 2.5 hour window of time to buzz around and make this happen.

Penelope, for gifting Brian the sweetest framed/matted/signed picture from the men’s retreat.

Everyone who came, watched and played, for enjoying the spread and toughing out the toe-numbing temperatures.