Having a bad day? Have I got a cure for you! I call it “Esther’s Chinny Chin Chin.” 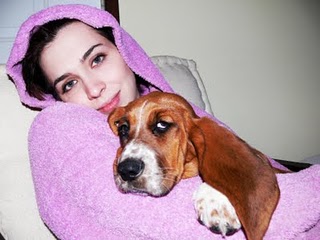 Have a seat. Now let my basset hound rest her chin on you. *Poof.* All your troubles are gone.

At least, that’s how I feel in the morning, in the evening and pretty much all the time.

Politicians having trouble getting along? Solution: Esther’s Chinny Chin Chin.

If only we could drop Chinny Chin Chin bombs all over the place. I imagine that if we could, human beings would float around with dopey smiles on their faces all the time. We’d probably never exercise enough and we’d be late everywhere we go. Because, you see, once Esther’s chin is resting on you, you’re now on Esther time. Under no circumstances will you want to get up to cook dinner, drive to the store or even wiggle your big toe. No, no. You stay because the CHIN stays. And when the chin leaves, then you may also leave. You have to savor the Chinny Chin Chin moment for all its worth because sweet, complicated Esther is not generous with her chin. Quite the contrary. The Chinny Chin Chin plays hard to get, making it all the more satisfying once you’ve got it.

It’s such a soft, little chin. If I could put a price on sharing Esther’s Chinny Chin Chin, I’d probably charge $317 an hour. (However, if you’re a Square Peace follower, I might cut you a deal.) That’s a pretty small price to pay for total peace.