You’d think that I’d know better than to think too highly of myself by now.  You’d think that I’d have learned a lesson or two in humility and how to show more grace toward others.  And while I might appear to be gracious on the outside, sometimes on the inside I’m still puffing my chest out in pride and indignation.  The Lord knows.  No, seriously.  He always kindly boots me off of my pedestal.  This week I got knocked off so hard that I can’t even find my pedestal.

Tuesday was my first day back to work after Christmas. Generally the week between Christmas and the New Year is slower than the rest of the month.  Not surprisingly, one of the reasons that it’s slower is that people’s schedules have been thrown off during the holidays and our clients flat out forget their hair appointments.  Such was the case for my second scheduled client on Tuesday morning.  Hair was the last thing on her mind, so she never showed.  Instead, I spent about 30 minutes knitting.

That was the first step onto my pedestal.

The rest of the day continued as usual.  Then I noticed that I never saw my last client come through the door.

That’s odd.  Is she here and I just missed her walking in?

I asked the receptionist if Last Client had arrived.  Nope.  A phone call was made and, sure enough, her appointment had also slipped her mind.

People always forget their appointments this time of year.  Even if we give them a reminder call, they still forget.  Tsk.

I climbed a little higher onto my pedestal… like I never forget anything.

Instead of leaving for home a little early, I decided to ask one of my coworkers to touch up my haircolor.  She kindly obliged.  About 10 minutes into the process (and ankle deep in my Thieves’ Christmas story), the receptionist came over and inquired, “Were you supposed to cut a Ben’s hair tonight?”

Me, “Ben?”  I looked at my schedule.  There was no Ben.  My last client forgot her appointment.  No one was scheduled after her.  I don’t think I have one single client named Ben.

I had COMPLETELY forgotten that I told a friend from church that he could come after hours for a haircut on Tuesday.  Not only could he come, but this was his first time getting his hair cut by me AND his first time EVER getting his hair cut in a salon by a professional.  Not only that, but I’ve been trying to convince him for years to let me fix his hair because it’s always bothered me (see Why I Cut My Pastor’s Hair).  And now, NOW!, this ONE time that he actually took me up on a free haircut, instead of being ready for him, I looked like the bride of Frankenstein as I was sitting in my very own chair – steeping in arrogance – getting my very own pretty head of hair colored. 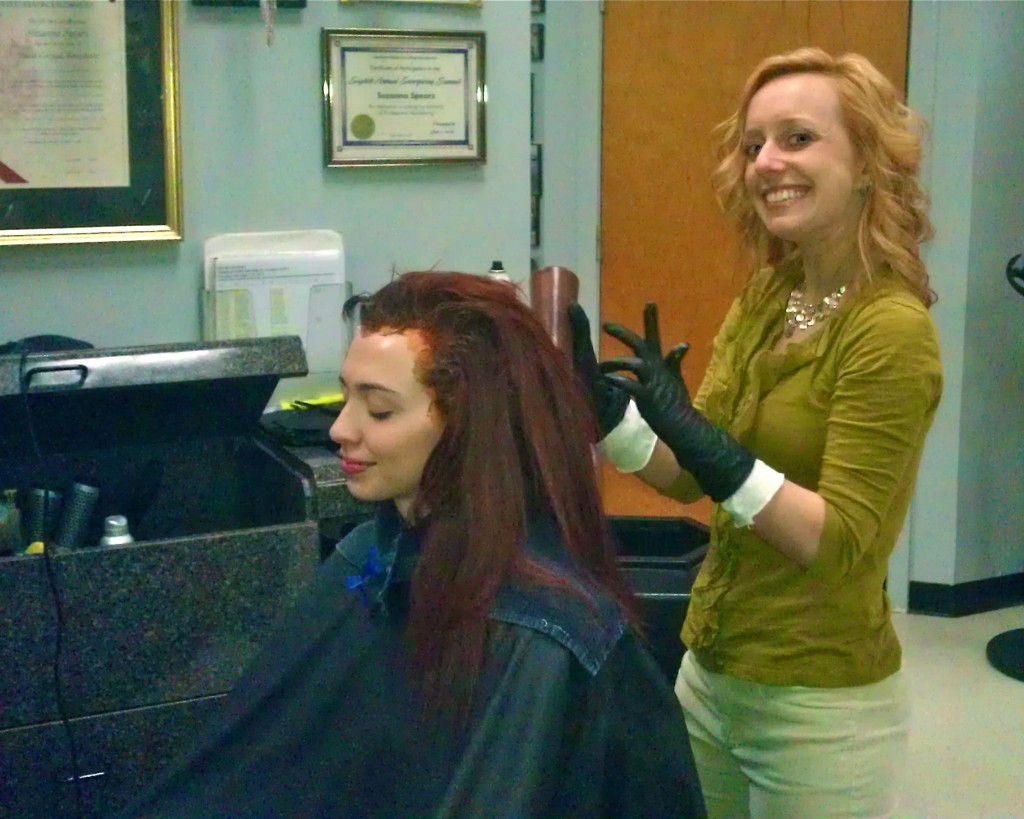 He had to wait 15 more minutes (the longest 15 minutes of my life).

Then I had to proceed to consult with him – discussing hair texture and bone structure – while my colored hair looked affright, not to mention the fact that the darkening color was staining my hairline, making me look like I was bleeding from the scalp.

So, yeah, my color processed for an additional hour and 15 minutes longer than it should have.  That’s right.  It went darker than intended and I presently look like I have deep auburn brown hair.

Never in all my life have I had to work through a first-time haircut, trying to get a client to take me seriously, while discussing his needs with haircolor on my head.  So humiliating.  However this was exactly the reminder that I needed to remember that we’re all human (even me), we all forget appointments every now and then and we all need to show each other grace.  Real grace.  Genuine grace.  Not the fake grace where you’re being pleasant on the outside but secretly believing that you would never be capable of the very thing for which you’re extending graciousness.  REAL.  GRACE.

So I’m thankful that I was humbled.  It’s good for me.

I showed Brian a picture of what I looked like the moment that Ben (and his pregnant wife) walked into the salon and Brian got a good laugh out of it.

Brian, “Ahhhhh!  You looked like a zombie!  …A pretty zombie.”

(PS – I’m secretly glad that my hair is darker now.  I missed it that way, but didn’t want to admit it since Brian brought it up first when he complained about me still being a redhead.  See complaint.)