Getting Bennett to sit and eat has proven to be quite the chore.  I can’t blame him as I have the same problem.  Sometimes it’s difficult to slow down and have that moment.  For me, it’s the fact that I’m keeping busy with tasks while chewing my food; for Bennett, it’s all that curiosity and energy lifting him out of his chair.

So for breakfast and/or lunch, I often let him eat standing at the counter with me while he’s in his little safety tower (by One Step Ahead).  When Bennett eats this way, he usually eats MORE because he’s distracted and mindlessly bringing his hand to his mouth while still having just enough room to shuffle his feet and legs around.  It’s not the flavor; he’ll eat anything.  Food just does not motivate this boy.

Here’s a video of Bennett standing in his safety tower and enjoying some Aunt Manny time:

Right now it’s important to me that he eats enough to replace all those calories he’s burning.  I suppose that on the flip side of this coin, this parenting decision could easily be judged for my failing to prioritize better table manners.  Presently, however, his nutrition is trumping this issue for me.  There will always be more opportunities to reason in the future!

That said, a few nights ago I had an incredibly trying dinnertime with Bennett.  While peace could have come quickly and easily had I let him stand or had I been satisfied with the meager three bites he had taken, I took the hard road and worked on getting that butt to stay seated (without strapping him down).  It. Was. Rough.  He just wanted to play!

Brian eventually got Bennett’s bath time going and I was so relieved to have a quiet moment to myself.  To say that I was feeling discouraged might have been an understatement.

But then I heard Brian exclaiming that Bennett peed on the potty.  (And not the kind that starts in the tub and finished in the potty, but actually peed from beginning to end in the potty – a first.)

And then he figured out how to say the words “every day.”  (It’s used a lot in his favorite book, Everywhere Babies.)

And then he figured out how to kiss.  (He was kissing me, kissing Daddy and kissing every baby on every page of that book.)

Wow.  That couldn’t have come at a better time.  By the time Bennett fell asleep, I had already forgotten the difficult dinner and was feeling mighty mushy. 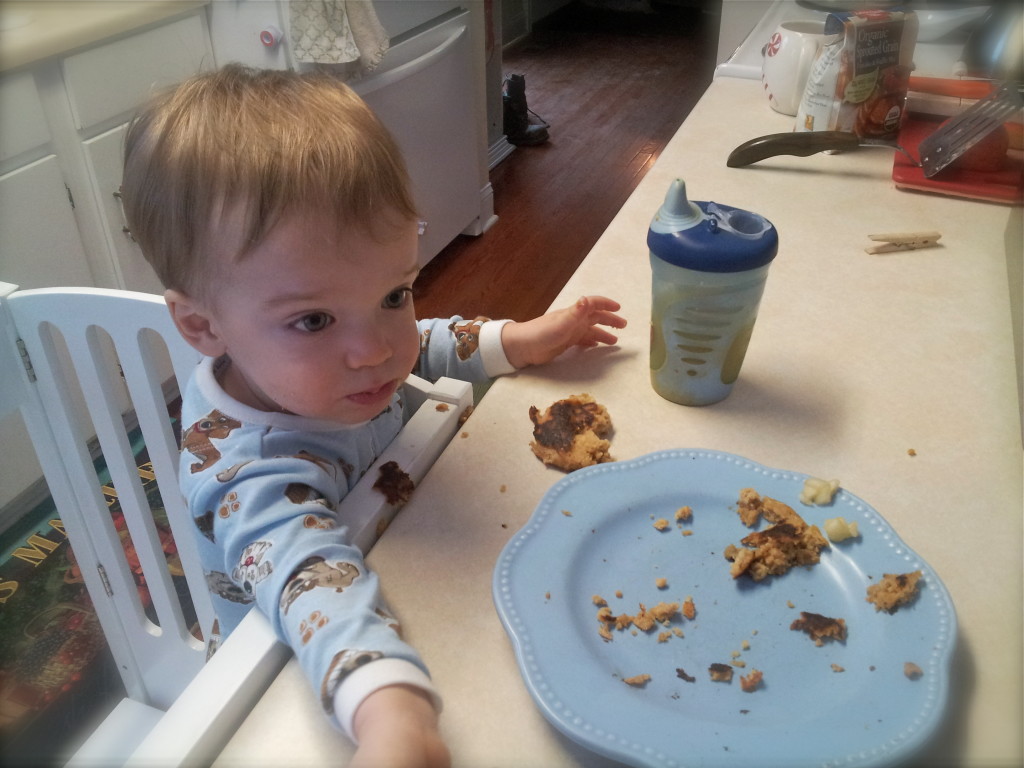