We can’t be sure if Bennett might’ve gotten any athletic genes from either of our gene pools (it’d be a miracle), but there’s a greater chance that the babe might be musically inclined.

Brian likes to mess around on the guitar.  Once upon a time, I liked doing the same, but haven’t pursued it in years.  While I’ll never forget the chords A, D and G, the others might take a bit of refreshing.

The first time that I ever attempted to learn the guitar, it was a brilliant moment of self-educating.  God bless the teachers who taught me how to read.  In so doing, they instilled in me the confidence to learn ANYthing.  If you can read it, you can learn it, I thought.  So I was about 12 years old at the time and Charley had brought a guitar and some books on technique into our home.  I shut myself in the end bedroom of our little, yellow trailer in Martinsburg, WV, and began placing a careful fingertip everywhere that the diagrams indicated.

Not a big deal, right?  Just place the fingers where the little, black dots are and we’ll be just fine, right?

Heaven only knows how deep I was into this obsession before I permitted an audience.  Charley kindly pointed out, somewhat surprised really, that I had been holding the guitar upside down the whole time.  You got that?  UPSIDE DOWN. I wound up having to reteach myself the proper way because apparently the chords don’t sound right being strummed backwards.

*sigh* Only a square piece…

It had never occurred to me, based on the charts, that I should have been holding the guitar neck in my left hand instead of my right.  So far as I was concerned, making the chords with my fingers was more complicated than strumming in rhythm.  Being right-handed, it seemed that my less-coordinated, left hand ought not to have been given the responsibility of the more difficult task of mastering chords.

In spite of this brilliant logic, my way is the wrong way (unless you intend to completely restring a guitar).

Well, unlike me, Brian still picks it up from time to time.  The other day, he picked it up for Bennett.  The babe reached out his curious hands and thoroughly enjoyed making noise with the strings, strumming and plucking each one. 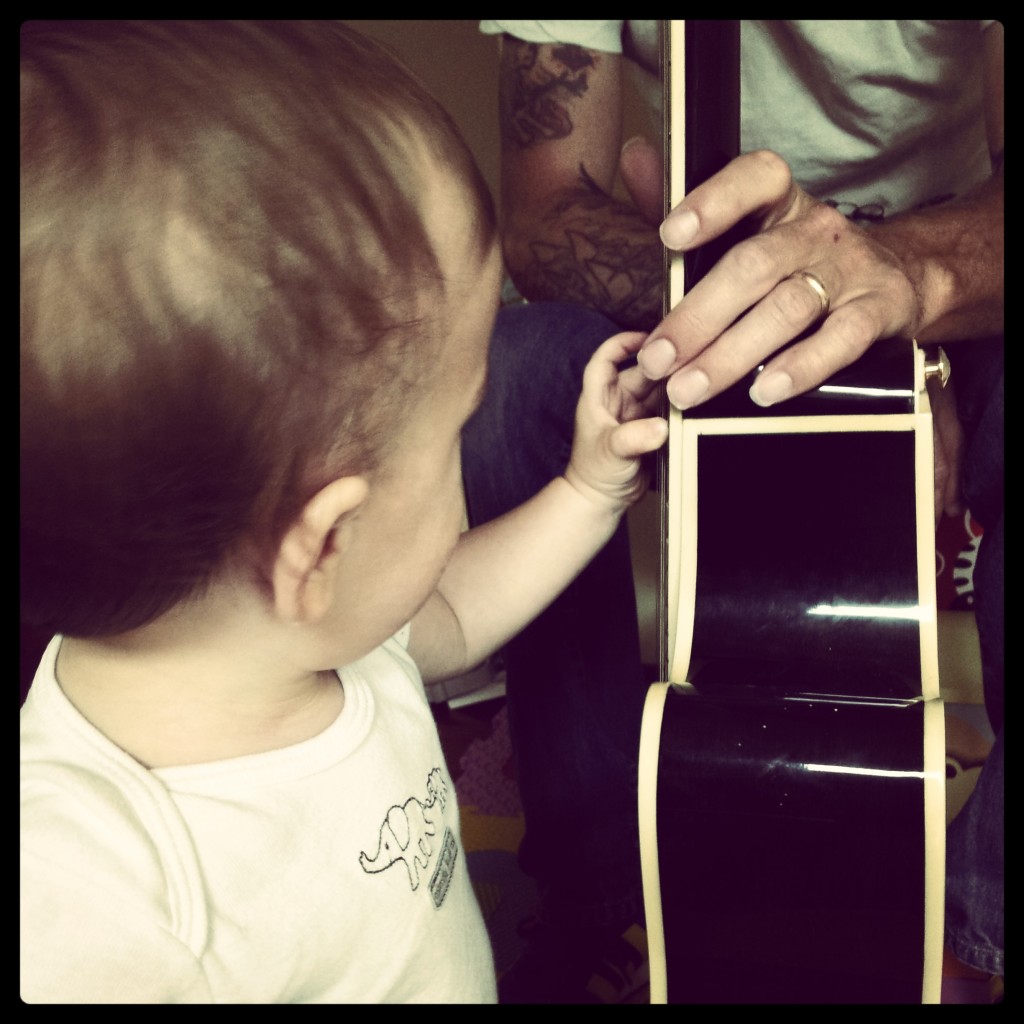 It looks like ol’ Benny Boo might also have my weird, double-jointed-type thumb thing, too.  Goody for him.