At the risk of being judged, I’ll admit that I really enjoy Regis and Kelly. Mostly Kelly. The woman is adorable, silly and knows how to laugh at herself. I admire people who don’t take themselves so seriously. It’s a humble trait and I hope I’ve got a sliver of it.

Then there’s her wardrobe. I’m sure I need to give her stylists some credit (both hair and wardrobe), but she owns her look. On many mornings I’ve been in the middle of getting ready for work only to hear the Regis and Kelly intro music come on in the living room. Ten seconds later I’m in the living room with a toothbrush dangling out of my mouth, my hair in a sloppy banana clip and my moisturizer still setting in my face. I always linger just long enough to see Kelly walk out and get seated so that I can evaluate her look-of-the-day (always cute). Then I go finish brushing my teeth.

One of my hopes in going to NYC this past weekend was that we’d be able to snag a spot in the audience on Monday morning by being first in the standby line. The website recommended arriving around 7am for standby. Naturally I planned on being there at 6:30. Thanks to the comedy club (and our lack of New York subway comprehension), we got to bed VERY late on Sunday night.

No worries. This could be your first and last time to ever see Regis and Kelly. You can totally do this on 4 hours of sleep. Just power through.

Brian was gracious to indulge me this whirlwind morning. He was just as tired as I was (and I think a little embarrassed to admit that he was going to see Regis and Kelly). I got ready in record time and we raced downstairs to hop a cab to the studio.  Arriving before anyone else was crowding the line, I was so excited and optimistic!

Noticing the large Regis and Kelly photo inside (Yes, we’re at the right place!), I darted up to the door and a man from within came out to greet us.

Me, “Is this where the standby line starts?”

I shaved my armpits for this? I got up after 4 ½  hours of sleep for this? Well, at least I didn’t curl my hair. Now what?

Regis and Kelly, you tricked me. Absolutely nowhere on your website does it indicate that you’re not recording right now. In fact, I checked later that day and the show aired with Regis saying, “It’s Monday, August 22nd…” Lies! You prerecorded that, you sneaks!

This is when it’s wise to have a Plan B. We didn’t have a Plan B at 6:30 on Monday morning. But we had a hankerin’ for breakfast. As the morning rush wore off and we sipped our coffees, we both volleyed the “So, whatchuwannado” question back and forth. 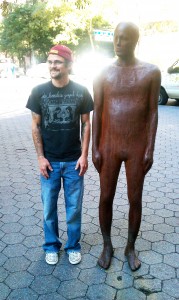 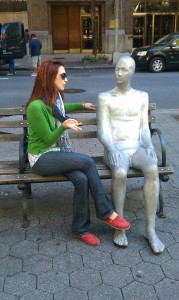 Yeeeeeeeah. No, I’ll talk to anybody. The man was just using way too much hairspray.  I was just trying to help a fella’ out.