This morning I sat on my couch for some coffee and Bible time. Esther and Beau jumped up to join me. 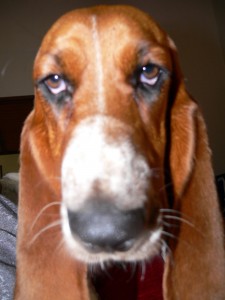 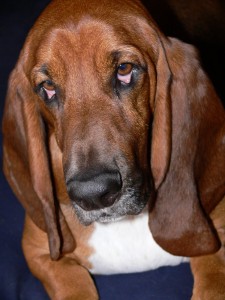 My heart swells with contentment and joy when I get to snuggle with these pups. You see, a few months ago Brian and I embarked on the difficult journey of reclaiming our bed. We haven’t had Beau as long, but we got Esther several years ago as a wee puppy. Upon watching a Dog Whisperer marathon, I concluded that crate training was the responsible approach to our bedtime. Unfortunately we had a Certain Roommate who threw a wrench in my plans. Esther very loudly let it be known that she, under no circumstances, preferred being in a crate at night. Certain Roommate cherished his sleep and therefore would let Esther out of her crate every night in order to hush her up. It’s very hard to crate train a pup when every time that she cries she ends up getting her way. I asked Brian to talk to Certain Roommate. All along, however, Brian secretly wanted Esther to be able to sleep in our bed. He never talked to Certain Roommate and we gave in. Pretty soon we became the people with little dog steps next to the bed.

I already sleep with a cat on my head. And eventually we got Beau (who was recently weighed at76.8 lbs). This put five bodies on our bed at night. Many mornings I’d wake up with back pain from having contorted to accommodate the dogs. The solution was obvious and dreaded: we had to start over.

One Monday evening we took the little steps away and replaced them with dog beds at the foot of our bed. Bear in mind that Monday nights, for me, are the nights that lead into my Tuesday-Saturday work week. Couple that with the fact that I had spent a majority of that weekend working on hair for my family. Was I rested? Not in the least. Regardless, that was the night that we decided to reclaim the bed.

Oh the dogs went gaga for their beds! They’re gigantic, plush and smell like cedar. Yes, these beds were divine… until we turned out the lights. Esther and Beau immediately protested, crying, whining and standing against the bed with faces that said, “What?! Aren’t you forgetting something?!” Needless to say, I had to get up just about every hour that night to lead the dogs back to their beds, pet them, soothe them and comfort them until I heard them *sigh* themselves back to sleep.

That morning I was exhausted, but I knew we had probably been through the worst of it. Brian also felt like we had achieved something monumental. So what did Brian do to reward Esther? He put her on our bed.

Yes, I freaked out a little.

And then I went to work for 12 hours.

That night, being night number two, I turned to Brian and requested, “Honey, I am SO tired and I really need some rest. Could you please take care of the dogs tonight?” “Sure,” he said.

Beau was pretty much over it. Esther, however, would not be deterred. So sure enough, she walked over to my side of the bed (the first of many attempts that night)and began the pathetic begging and heart-breaking pleading for us to let her back on. Assuming that Brian had this, I desperately tried to tune out the noise and get some rest. However Brian’s version of taking care of the dogs was not the same approach as mine. Rather than getting out of bed and reminding her that she had her own, he didn’t move a muscle and barked, “QUIET! GO LAY DOWN! Bad dog.”

Um, show of hands if you think that I actually got any rest that night.  ??

The next morning I turned to Brian and gently addressed this issue.

Me, “Brian… I really don’t like the way you’re yelling at Esther.”

Me, “You need to understand, she’s not being bad. She’s not getting into the trash can or the litter box. She’d not being bad. She’s communicating that she’s confused and worried and wants on the bed. And dogs only have so many ways to communicate. So if you’re mad at 3:00 in the morning, you need to call your friend, Certain Roommate, and tell him this is his fault.”

Brian, “Well, what am I supposed to do?”

Brian, “It doesn’t take all that.”

Me, “Yes it does! You know, this is what it’s going to be like if we have kids.”

Brian, “No it won’t. This is totally different.”

So I handled night 3 and 4, getting up about 4 times each night. I was so tired that I was delirious. I thought, “If I think about how tired I am, I think I’m going to cry.” So I plugged along, pretty much doing hair on autopilot.

On the fifth night they rested.

That morning I woke up and once again thought I’d cry, this time from relief. Then panic set in for a minute as I considered that the only possible way I could be so rested would be if something had gone wrong! Did I sleep in? Was I late for work? None of the above. Esther and Beau were still fast asleep on their beds.

Except we don’t call the beds beds. Bed has always referred to our bed. Their beds are now called sleepytimes. Every night we sound like complete idiots as we sing to each dog, “Go to your sleepytime!” Oh, well. At least my back doesn’t hurt anymore! And my bed feels like an island!