When I was a little girl I wanted to be a cow girl.  The decision was easy because, you see, I already had the perfect outfit.  Eventually I grew out of said outfit and decided to be a few more things: a teacher, a lawyer, a news anchor and a flight attendant.  But definitely never a missionary (because they’re just crazy).  And definitely never a hairstylist (because I believed that people assumed hairstylists didn’t excel in school, and I was a straight-A student).  Then in my teens I experienced a gradual 180o change of heart.  I was fortunate to travel abroad on several summer mission trips.  These experiences of serving people who lived with less than I did left me aching for more, a life of selfless service.  For a while I resisted this weight on my heart; but when I finally surrendered to it, I went bananas with it.  I remembered what it was like when missionaries would come back on sabbatical and share their stories with the church.  They’d freak us all out with the details of how they had adapted to their new culture: what they ate, what they wore, what they lived without, etc.  These missionaries would use bizarre visual aids to really grip our attention and drive home just how strange life was for them.

Well, I wanted to freak people out, too.  Where a life of missions work used to repel me, suddenly I just knew I was perfect for the job!  First of all, I was fluent in French, which was perfect for a move to Africa.  Second of all, my heart was already abroad.  Our American lifestyle seemed so indulgent and I could see myself living with the bare minimum elsewhere.  Thirdly, and most importantly, I had a lot of pride.  Not the good kind.  The I-think-I’m-better-and-braver kind.  The you-need-refrigeration-and-I-don’t kind.  The look-at-how-much-I’m-willing-to-sacrifice kind.  What competitive and arrogant pride I had!  Look at how I took a pure direction from the Lord and mangled it with my own filthy, self-interested, pat-me-on-the-back agenda!  God was not fooled.  To anyone else it might have seemed like I wanted to serve the Lord.  Really, if you checked my heart, I was just serving myself.

Fast forward to 19 years old, I had been through 1 ½ years of Bible school/missions training.  Jesus and I took a long walk where He did the talking and I did the listening.  Slowly and kindly He settled on my heart three handpicked, pride-killing ministries for me to set my sights on.

No!  Not America!  Anywhere but here!  I’ve already told everyone I’ll be living overseas!  They’ll think I chickened out!  America already has a church on every corner!  Take me somewhere where I need to be brave!  I don’t need to be brave to live here; I’ll be too comfortable… just like everybody else!

No!  Not women!  Women hate me!  And they never really say what they’re thinking!  I get along so much better with men.  I don’t connect well with women.  You know this!

Now just hold it right there.  Christians suffocate me!  Just how am I supposed to explain this to everyone?  You want me – when there’s a world full of disadvantaged, hurting families in underdeveloped countries – to show the love of God to people who already believe in the love of God?  What a waste!  Use me somewhere else!  I’m brave!  Why would you open my heart to missions work just to take it away?

(What you probably don’t know about me is that, at that point, I had been very, very hurt by hypocritical Christians.  I had been jaded to the point where I had to step back and evaluate if I even wanted to be associated with Christianity at all.  As it turns out, I might take issue with certain people who claim to be Christians, but I take no issue with Jesus.)

God let me chew on this for some time.  It felt like a rug had been pulled out from under me.  Isn’t it the worst feeling when you have to go back on the words that you’ve spoken with the most enthusiasm, the plans you’ve declared and then undeclared?  It doesn’t feel brave; it feels meek and embarrassing.  When I moved back home, less than a year later, my mom told me that a woman from her church was looking for an apprentice at a hair salon.  I went through my mental checklist: America? yes; Women? yes; Christians? yes.  Then I did a little mental shrug and figured that if I was going to let God break me of my pride, I might as well let Him finish the job.

I have been a hairstylist for almost 8 years now and can say with 100% certainty that I was made for this.  God knew me better than I knew myself (no big surprise there since He designed me this way).  If it wasn’t for my big, fat, arrogant pride getting in the way of everything He might not have had to go such a roundabout way of getting me here.  But I’m so glad He did. 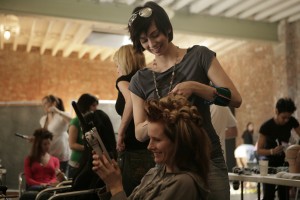